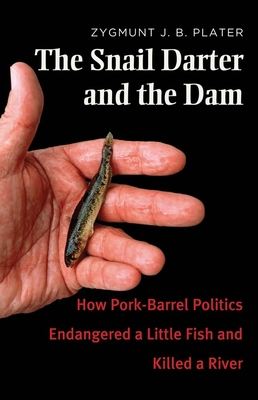 The Snail Darter and the Dam

Even today, thirty years after the legal battles to save the endangered snail darter, the little fish that blocked completion of a TVA dam is still invoked as an icon of leftist extremism and governmental foolishness. In this eye-opening book, the lawyer who with his students fought and won the Supreme Court case—known officially as Tennessee Valley Authority v. Hill—tells the hidden story behind one of the nation’s most significant environmental law battles.
The realities of the darter’s case, Plater asserts, have been consistently mischaracterized in politics and the media. This book offers a detailed account of the six-year crusade against a pork-barrel project that made no economic sense and was flawed from the start. In reality TVA’s project was designed for recreation and real estate development. And at the heart of the little group fighting the project in the courts and Congress were family farmers trying to save their homes and farms, most of which were to be resold in a corporate land development scheme. Plater’s gripping tale of citizens navigating the tangled corridors of national power stimulates important questions about our nation’s governance, and at last sets the snail darter’s record straight.


Praise For The Snail Darter and the Dam: How Pork-Barrel Politics Endangered a Little Fish and Killed a River…

“This is the inside story, laid out with wonderful lucidity, of a long and fascinating battle that became an icon of its era and remains instructive today.”—Jonathan Harr, author of A Civil Action
— Jonathan Harr

“The story of the snail darter and the TVA is the Thermopylae in the history of America’s conservation movement, and this book by Zygmunt Plater deserves to be the classic telling of it.”—Edward O. Wilson, Harvard University
— Edward O. Wilson

"The Snail Darter and the Dam is an inspiring and informative American story of regular people fighting powerful special interests.  It's about how the public interest lost out to big money and its political allies--and failures by the local and national press to report the story fairly, accurately, and in proper context."—Dan Rather, Anchor and Managing Editor of AXS TV

"TVA v. Hill is one of my favorite cases. This eminently readable account of the full history of the case is even more interesting than the story told in Warren Burger’s opinion for the Court (or my memory of the oral argument and the shifting positions of the Justices in my book, Five Chiefs). The author’s account of how President Carter rejected the “God Committee’s” verdict about the darter is especially so."—Hon. Justice John Paul Stevens, Supreme Court of the United States [retired]
— Hon. Justice John Paul Stevens [retired]

"The inside story of a long and fascinating battle—legal, political, environmental, and personal— that became an icon of its era and remains instructive even today. It’s a blueprint for community action, and—sadly—a still-current roadmap of the way in which Washington works. The legal maneuverings are laid out with wonderful lucidity, but even more the book is by turn compassionate, angry, and intensely humane, and well worth reading.”—Jonathan Harr, author of A Civil Action
— Jonathan Harr

"A compelling history . . . that sheds light on the policy process and is fascinating in its own right.  Recommended [for] all readership levels."—Choice
— Choice

“Plater . . . does a deft job of weaving together the legal framework and context for his fight against TVA, which he ended up winning before the Supreme Court in the landmark case TVA v. Hill. He employs a strict first-person, present-tense perspective that gives the book an engaging, memoiristic tone. [He] provides a wealth of detail that makes for compelling reading, and he has a knack for bringing drama to even the most technical court proceedings."—Clay Risen, Chapter 16
— Clay Risen

“. . . as compelling history of a controversy that shed light on the policy process and is fascinating in its own right.”—Choice
— Choice

Zygmunt J. B. Plater is professor of law and director of the Land & Environmental Law Program at Boston College Law School. He lives in Newton Highlands, MA.
Loading...
or
Not Currently Available for Direct Purchase