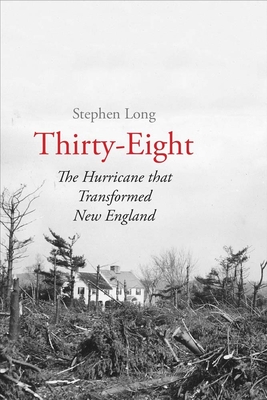 The Hurricane That Transformed New England

The hurricane that pummeled the northeastern United States on September 21, 1938, was New England’s most damaging weather event ever. To call it “New England’s Katrina” might be to understate its power. Without warning, the storm plowed into Long Island and New England, killing hundreds of people and destroying roads, bridges, dams, and buildings that stood in its path. Not yet spent, the hurricane then raced inland, maintaining high winds into Vermont and New Hampshire and uprooting millions of acres of forest. This book is the first to investigate how the hurricane of ’38 transformed New England, bringing about social and ecological changes that can still be observed these many decades later.

The hurricane’s impact was erratic—some swaths of forest were destroyed while others nearby remained unscathed; some stricken forests retain their prehurricane character, others have been transformed. Stephen Long explores these contradictions, drawing on survivors’ vivid memories of the storm and its aftermath and on his own familiarity with New England’s forests, where he discovers clues to the storm’s legacies even now. Thirty-Eight is a gripping story of a singularly destructive hurricane. It also provides important and insightful information on how best to prepare for the inevitable next great storm.

Praise For Thirty-Eight: The Hurricane That Transformed New England…

"Even if the environmental impact of the hurricane doesn’t interest you, the first-person accounts make fascinating reading."—Jan Gardner, Boston Globe

"An all-inclusive rendition of one of the most destructive storms in the northeastern United States’ modern history."—Virginia Dean, Vermont Standard

"Stephen Long clearly and dramatically, and sometimes with droll humor details the mayhem produced by torrential rain followed by winds that gusted to nearly 200 miles an hour. . . . He serves up a mix of regional history, meteorology, botany, ecology, politics, economics—all seasoned with anecdotes."—Robert Whitcomb, Weekly Standard

"The author’s enthusiasm shines on every page. . . . Even now, the storm’s traces are there if you know how to find them. The great hurricane is still with us and probably always will be. Long has done us the favor of creating a new way to think about it."—John Ruddy, Day

"Long's book stands as more than just the history of a hurricane. It brings to light a history of New England forest use, succession, science, and management that anyone interested in the region's environmental history will enjoy."—Matthew McKenzie, Connecticut History Review

“Combining meticulous research with gripping first-hand accounts of survivors, Thirty-Eight promises to enthrall any of those interested in the ecological or social history of New England’s mighty woods.”—New Criterion

“Stephen Long unpacks the environmental history behind the hurricane and looks at how it rendered widespread social and ecological changes.”—Backstory

"A must-read for anyone interested in forest succession, weather patterns, and the history of New England."—Bernd Heinrich, author of The Trees in My Forest

"I could not imagine a more appropriate, indeed precedent-setting, integration of science and regional history. The ‘38 hurricane is truly a touchstone in New England history and this is the first book to do it justice."—Charlie Cogbill, author of The Changing Nature of the Maine Woods

"Thirty-Eight illuminates the great hurricane from a unique, compelling—maybe even urgent—perspective. With humor, scholarship and insight, Stephen Long helps the reader understand how important the white pine forests are to New England. You'll never look at a windstorm or a fallen tree the same way."—Stewart O'Nan, author of The Circus Fire

"A wonderfully written account of an ecologically and socially transformative event that continues to shape the development of New England’s forests and serves as an important point of reflection on disaster preparedness and appropriate management response."—Anthony D’Amato, University of Vermont

"Thirty-Eight is New England’s greatest missing story, because this massive hurricane transformed landscapes, lives, and minds and continues to reverberate through the region today."—David Foster, author of Hemlock: Forest Giant on the Edge

Stephen Long is founder and former editor of Northern Woodlands magazine and author of More Than a Woodlot: Getting the Most from Your Family Forest. He lives in Corinth, VT.
Loading...
or
Not Currently Available for Direct Purchase