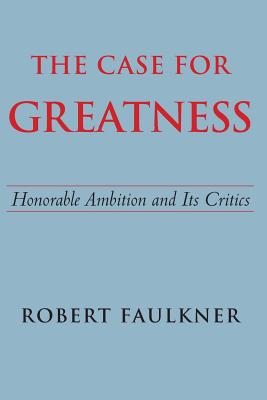 The Case for Greatness

Honorable Ambition and Its Critics

The Case for Greatness is a spirited look at political ambition, good and bad, with particular attention to honorable ambition. Robert Faulkner contends that too many modern accounts of leadership slight such things as determination to excel, good judgment, justice, and a sense of honor—the very qualities that distinguish the truly great. And here he offers an attempt to recover “a reasonable understanding of excellence,” that which distinguishes a Franklin D. Roosevelt and a Lincoln from lesser leaders. Faulkner finds the most telling diagnoses in antiquity and examines closely Aristotle’s great-souled man, two accounts of the spectacular and dubious Athenian politician Alcibiades, and the life of the imperial conqueror Cyrus the Great. There results a complex and compelling picture of greatness and its problems. Faulkner dissects military and imperial ambition, the art of leadership, and, in the later example of George Washington, ambition in the service of popular self-government. He also addresses modern indictments of even the best forms of political greatness, whether in the critical thinking of Hobbes, the idealism of Kant, the relativism and brutalism of Nietzsche, or the egalitarianism of Rawls and Arendt. He shows how modern philosophy came to doubt and indeed disdain even the best forms of ambition. This book is a nuanced defense of admirable ambition and the honor-seeking life, as well as an irresistible invitation to apply these terms to our own times and leaders.

Robert Faulkner is professor of political science at Boston College.