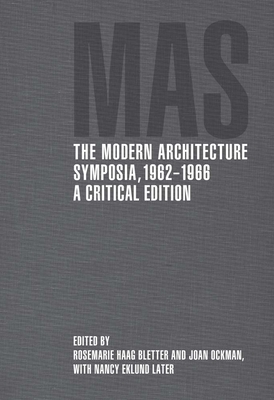 In a series of three symposia at Columbia University in the 1960s, leading scholars and critics gathered to re-examine the architecture of the 1910s, 1920s, and 1930s and assess its scope and significance anew. Chaired by Henry-Russell Hitchcock with the support of Philip Johnson, the Modern Architecture Symposia marked a pivotal moment in the reappraisal of early modern architecture and its historiography during the late modern period. This book contains the symposia's formal papers and informal conversations, the majority unpublished and presented for the first time as a group, and offers new insight into the architects, ideologies, stylistic influences, and geographic variation that informed modern architectural production in the early 20th century. Additionally, the discussions it captures between symposia participants—many of whom were considered to be foremost among European and American architectural historians of the period—reveal emerging methodological debates that would reshape the dominant narrative during the late modern and postmodern period.

Rosemarie Haag Bletter is professor emerita at the Graduate Center of the City University of New York. Joan Ockman is a distinguished senior fellow at the University of Pennsylvania School of Design, and former director of the Temple Hoyne Buell Center for the Study of American Architecture, Columbia University. Nancy Eklund Later is an editor specializing in books on architecture and architectural history.
Loading...
or
Not Currently Available for Direct Purchase