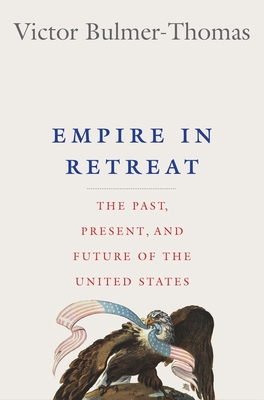 The Past, Present, and Future of the United States

A respected authority on international relations and foreign policy, Victor Bulmer‑Thomas offers a grand survey of the United States as an empire. From its territorial expansion after independence, through hegemonic rule following World War II, to the nation’s current imperial retreat, the United States has had an uneasy relationship with the idea of itself as an empire. In this book Bulmer‑Thomas offers three definitions of empire—territorial, informal, and institutional—that help to explain the nation’s past and forecast a future in which the United States will cease to play an imperial role. Arguing that the move toward diminished geopolitical dominance reflects the aspirations of most U.S. citizens, he asserts that imperial retreat does not necessarily mean national decline and may ultimately strengthen the nation‑state. At this pivotal juncture in American history, Bulmer‑Thomas’s uniquely global perspective will be widely read and discussed across a range of fields.


Praise For Empire in Retreat: The Past, Present, and Future of the United States…

"An expansive and comprehensive treatise on American imperialism. This potent study presents a robust theoretical framework for the concept of American empire. . . . This book will be of immense interest to students, scholars, and general readers of U.S. history, U.S. foreign policy, and international relations."—Publishers Weekly

"Victor Bulmer-Thomas has written an immensely important work that, while explaining in detail the formation, development, apogee and decline-in-progress of the US Empire, is easily readable and illuminating, and should become indispensable reading for anyone who wants to understand the world today and prepare for facing it in ways most beneficial to one’s own country."—Amandala (Belize)

"Incisive. . . . The global perspective on the rise and decline of the American empire . . . constitutes a powerful explanatory framework that will be of interest to scholars and practitioners alike. Diminishing US geopolitical dominance, the author concludes, need not lead to national decline and may in fact strengthen the country."—Choice

"Bulmer-Thomas’s discussion carries great import today, particularly in the era of the Trump administration, where confusion and uncertainty about the United States in world affairs prevails."—H-Net Reviews

"Victor Bulmer-Thomas’s Empire in Retreat maintains that America has harbored imperial ambitions since its founding, and argues that its focus shifted in the twentieth century, from acquiring territory to penetrating foreign countries and influencing their governments to support US strategic and economic interests."—Jackson Lears, New York Review of Books

"Excellent. . . . This book is perhaps the most comprehensive survey in a single volume of the rise (and possible fall) of American empire. Students in particular will welcome Bulmer‐Thomas's clear and accessible prose, making it a fine text for any course on U.S. foreign policy."—Historian

“This is a comprehensive study of the United States as a long-standing empire and world power by a leading economic historian of Latin America and the Caribbean. It explains why its global leadership is increasingly challenged. It is a must read for those interested in the origins and causes of this change, notably in the Trump era.”—José Antonio Ocampo, Columbia University

“This new book by Victor Bulmer-Thomas, a leading authority in the study of the Americas, compellingly redefines the notion of American imperialism, while explaining that the current transitional period in U.S. world standing can be both painful and liberating for its citizens. A must read.”—Alfredo Toro Hardy, former Venezuelan ambassador to the United States

“An insightful book that offers a compelling vision of the history of the United States as a semi-global empire.”—Oleg Ivanov

Victor Bulmer‑Thomas is professor emeritus at the University of London, honorary professor of the Institute of the Americas, University College London, and associate fellow in the U.S. and Americas Program, Chatham House, where he was Director from 2001 to 2006.
Loading...
or
Not Currently Available for Direct Purchase