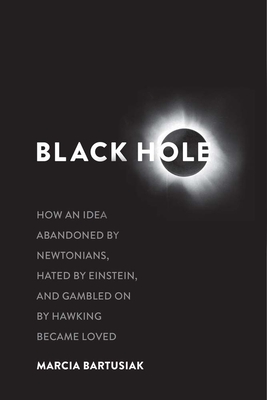 How an Idea Abandoned by Newtonians, Hated by Einstein, and Gambled On by Hawking Became Loved

For more than half a century, physicists and astronomers engaged in heated dispute over the possibility of black holes in the universe. The weirdly alien notion of a space-time abyss from which nothing escapes—not even light—seemed to confound all logic. This engrossing book tells the story of the fierce black hole debates and the contributions of Einstein and Hawking and other leading thinkers who completely altered our view of the universe.

Renowned science writer Marcia Bartusiak shows how the black hole helped revive Einstein’s greatest achievement, the general theory of relativity, after decades during which it had been pushed into the shadows. Not until astronomers discovered such surprising new phenomena as neutron stars and black holes did the once-sedate universe transform into an Einsteinian cosmos, filled with sources of titanic energy that can be understood only in the light of relativity. This book celebrates the hundredth anniversary of general relativity, uncovers how the black hole really got its name, and recounts the scientists’ frustrating, exhilarating, and at times humorous battles over the acceptance of one of history’s most dazzling ideas.

Praise For Black Hole: How an Idea Abandoned by Newtonians, Hated by Einstein, and Gambled On by Hawking Became Loved…

“You don’t need an advanced degree to enjoy this entertaining tale of how black holes meandered their way from theoretical oddity into everyday consciousness. . . . A beautiful case study in how scientific ideas grow through inspiration, thought and, finally, observation.”—Mike Brown, Wall Street Journal

"[A] Sparkling new book . . . One of the delights of this witty book is seeing the many ways physicists historically found to dismiss, deny and disdain black holes."—Washington Post

“Bartusiak’s lively, accessible writing and insight into the personalities behind the science make her book an entertaining and informative read.”—Publishers Weekly

"Black Hole is engaging and lively, weaving in personal drama . . . with a clear account of the underlying science.  An acclaimed science writer."—Tom Siegfried, Science News

"Expertly tells the story of the emergence of black holes. . . . [Bartusiak] offers a concise but comprehensive history . . . from the 18th century ponderings of stars massive enough that light could not escape to present-day studies of these very real objects."—Jeff Foust, The Space Review

"Lively and readable. . . . Read it if you want to know how the concept of black holes has changed dramatically over the past 100 years—from being an apparent mistake in the maths to the strangest and most outlandish objects that we (currently) know of."—Pippa Goldschmidt, Spectator

"Bartusiak's book traces the crooked path black holes took through the history of science. . . . The narrative features intriguing cameos from many of history's well-known physicists."—Scientific American, listed as a recommended book

"Tells this story with . . . an accessibility that other popular writers in the field have sometimes struggled to achieve when dealing with the subject. There’s as much history and character study as hard science, which is no bad thing, and even the most mathophobic reader will find this book a satisfying and enlightening read."—Mike Parker, Tribune magazine

"Lively and dramatic. . . . There's no danger of being bored. Bartusiak does a good job of tracing the twisted route that our understanding has followed, from Newton to Einstein and to today as we try to extend gravity to quantum scales."—Tara Shears, Times Higher Education Supplement

“Black Hole is informative and exceedingly well written, a brilliant introduction to the history of black holes and general relativity.”—The Common Reader

“What [Bartusiak] accomplishes deftly is to provide a fascinating account of how the scientific community came to embrace the idea of a black hole.”—The New York Review of Books

Longlisted for the 2016 PEN/E.O. Wilson Literary Science Writing Award given by PEN America.

Won honorable mention for the 2016 PROSE Awards in the Cosmology & Astronomy category.

Shortlisted for the 2016 Award in Science given by the Phi Beta Kappa Society.

“Marcia Bartusiak takes us on a fascinating ride around black holes, showing the beauty and mystery of a concept that has intrigued scientists from Einstein to Hawking.”—Walter Isaacson, CEO of the Aspen Institute and author of Benjamin Franklin, Einstein, and Steve Jobs

“An engrossing and mind-bending read . . . Bartusiak provides a front row seat as many of the most famous scientists of all time grapple with the strangest objects in the universe, black holes.”—Adam Riess, Nobel Laureate in Physics, 2011

“Bartusiak's new book is thoroughly researched, beautifully written, and full of insights about the nature of the scientific enterprise. Aficionados of black holes will love this book.”—Alan Lightman, author of Einstein's Dreams and The Accidental Universe

Marcia Bartusiak is Professor of the Practice, Graduate Program in Science Writing, Massachusetts Institute of Technology, and the award-winning author of five previous books, including most recently The Day We Found the Universe. She lives in Sudbury, MA.
Loading...
or
Not Currently Available for Direct Purchase