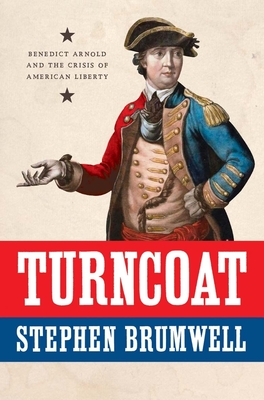 Benedict Arnold and the Crisis of American Liberty

“Brumwell offers a provocative explanation for one of the enduring mysteries of the American Revolution: why did Benedict Arnold, one of ‘Washington’s most celebrated and valued subordinates,’ become a traitor in 1780? —Publishers Weekly, Starred Review

"In a time when charges of treason and disloyalty intrude into our daily politics, Turncoat is essential reading.”—R. R. B. Bernstein, City College of New York

General Benedict Arnold’s failed attempt to betray the fortress of West Point to the British in 1780 stands as one of the most infamous episodes in American history. In the light of a shining record of bravery and unquestioned commitment to the Revolution, Arnold’s defection came as an appalling shock. Contemporaries believed he had been corrupted by greed; historians have theorized that he had come to resent the lack of recognition for his merits and sacrifices. In this provocative book Stephen Brumwell challenges such interpretations and draws on unexplored archives to reveal other crucial factors that illuminate Arnold’s abandonment of the revolutionary cause he once championed.

This work traces Arnold’s journey from enthusiastic support of American independence to his spectacularly traitorous acts and narrow escape. Brumwell’s research leads to an unexpected conclusion: Arnold’s mystifying betrayal was driven by a staunch conviction that America’s best interests would be served by halting the bloodshed and reuniting the fractured British Empire.


Praise For Turncoat: Benedict Arnold and the Crisis of American Liberty…

“Historian Brumwell offers a provocative explanation for one of the enduring mysteries of the American Revolution: why did Benedict Arnold, one of ‘Washington’s most celebrated and valued subordinates,’ become a traitor in 1780? . . . Open-minded readers will appreciate his dissenting view that Arnold may have ‘genuinely had his country’s well-being at heart,’ a view that Brumwell believes ‘merits careful consideration within any balanced re-examination of America’s most infamous traitor.’”—Publishers Weekly, Starred Review

“Gripping . . . This fine book situates Benedict Arnold within several contexts: issues of loyalty and disloyalty; treason as a political concept and a crime; relationships among honor, reputation, politics, and war; and the ordeal of 1780 for everyone embroiled in the Revolutionary War.  In a time when charges of treason and disloyalty intrude into our daily politics, Turncoat is essential reading.”—R. R. B. Bernstein, City College of New York

“Lucidly written and rich in detail, Brumwell’s narrative explains Benedict Arnold’s treason by taking him at his word—that the Revolution’s arch-traitor turned his coat to save America from a bloody civil war and a patriot cause gone astray. Brumwell’s conclusions are as provocative as Arnold was controversial.  A gripping read.”—Mark Edward Lender, Co-author of the award-winning Fatal Sunday

"Written with grace and flair by a leading military historian Turncoat examines Benedict Arnold's career as a soldier on both sides during the War of Independence. In so doing Brumwell has written an incisive study of the war and the very meaning of the American Revolution itself. This is the defining portrait of Arnold for the twenty-first century.”—Francis D. Cogliano, author of Revolutionary America

Stephen Brumwell is a writer and independent historian specializing in British-American military affairs of the eighteenth century. He received the George Washington Book Prize for his most recent book, George Washington: Gentleman Warrior. He lives in Amsterdam, Netherlands.
Loading...
or
Not Currently Available for Direct Purchase