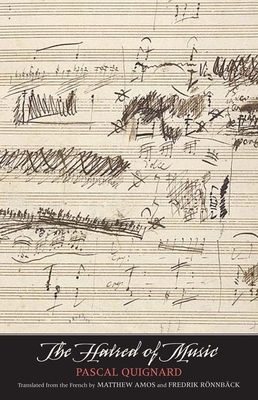 The Hatred of Music (The Margellos World Republic of Letters) (Hardcover)

How does a man who once adored music beyond measure come to revile it as a form of tyranny?

Throughout Pascal Quignard’s distinguished literary career, music has been a recurring obsession. As a musician he organized the International Festival of Baroque Opera and Theatre at Versailles in the early 1990s, and thus was instrumental in the rediscovery of much forgotten classical music. Yet in 1994 he abruptly renounced all musical activities. The Hatred of Music is Quignard’s masterful exploration of the power of music and what history reveals about the dangers it poses.

From prehistoric chants to challenging contemporary compositions, Quignard reflects on music of all kinds and eras. He draws on vast cultural knowledge—the Bible, Greek mythology, early modern history, modern philosophy, the Holocaust, and more—to develop ten accessible treatises on music. In each of these small masterpieces the author exposes music’s potential to manipulate, to mesmerize, to domesticate. Especially disturbing is his scrutiny of the role music played in the concentration camps of Nazi Germany. Quignard’s provocative book takes on particular relevance today, as we find ourselves surrounded by music as never before in history.

Pascal Quignard is a French novelist, essayist, critic, translator, and former musician. He is the author of more than sixty books and in 2002 won the Prix Goncourt, France’s top literary prize, for his genre-defying The Roving Shadows. He lives in France. Matthew Amos is visiting professor of French, Bard College. He lives in Brooklyn, NY. Fredrik Rönnbäck has published on Michel Leiris and Georges Bataille and has translated several works by Georges Perec into Swedish. He lives in Sweden.

“Vivid, straightforward . . . Nourished by so much that is old, Quignard’s prose style and his very conception of writing are new . . . [An] invigorating book . . . After reading these pages bristling with ideas and insights, one cannot help but listen to music differently.”—John Taylor, Arts Fuse
— John Taylor

“I love music, but I like to hear both sides of an argument, so I picked up Pascal Quignard’s The Hatred of Music . . . I can’t deny the depth of his thinking, to say nothing of his gift for aphorism . . . As a kind of lyrical discourse on how we hear, The Hatred of Music belongs on the shelf next to Hillel Schwartz’s Making Noise.”—Dan Piepenbring, Paris Review (“Staff Picks”)
— Dan Piepenbring

“Ultimately, The Hatred of Music is an appeal for the contemplation of silence. Despite its pique, the text teems with insights into our attention to sound.”—Ron Slate, On the Seawall
— Ron Slate

“Quignard’s slender, unnerving volume is quite different in tone from the sober academic books on the theme of music and violence. It hovers in a peculiarly French space between philosophy and fiction, and goes on mysterious lyrical flights, animating scenes from history and myth. . . . [Quignard] wrote ‘The Hatred of Music’ as a cri de cœur.”—Alex Ross, New Yorker
— Alex Ross

“Just about any reader will be perversely thrilled by the intersections Quignard unearths between the mind and the world of sound.”—Jeanne Bonner, Three Percent
— Jeanne Bonner
or
Not Currently Available for Direct Purchase
Copyright © 2020 American Booksellers Association