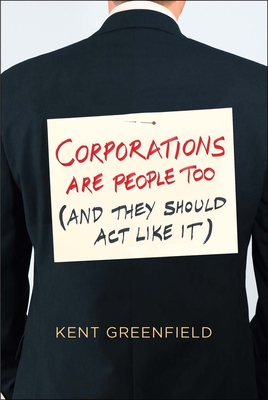 Corporations Are People Too (Hardcover)

Are corporations people? The U.S. Supreme Court launched a heated debate when it ruled in Citizens United            that corporations can claim the same free speech rights as humans. Should they be able to claim rights of free speech, religious conscience, and due process? Kent Greenfield provides an answer: Sometimes.

With an analysis sure to challenge the assumptions of both progressives and conservatives, Greenfield explores corporations’ claims to constitutional rights and the foundational conflicts about their obligations in society and concludes that a blanket opposition to corporate personhood is misguided, since it is consistent with both the purpose of corporations and the Constitution itself that corporations can claim rights at least some of the time. The problem with Citizens United is not that corporations have a right to speak, but for whom they speak. The solution is not to end corporate personhood but to require corporations to act more like citizens.

Kent Greenfield is a law professor at Boston College, a former Supreme Court clerk, and an expert in constitutional and corporate law. His work has been featured in the New York Times, the Washington Post, the Atlantic, and on CNN.

Praise For Corporations Are People Too: (And They Should Act Like It)…

"A must read. Greenfield is one of the very few law professors in America with a serious background in both constitutional and corporate law, and his double expertise is reflected in almost every chapter."—Eric Segall, Dorf on Law
"A subtle, creative and intellectually brave assessment of the nature of corporate personhood and the legal and policy results—constitutional and otherwise-- that follow from that assessment. Greenfield offers thoughtful and often original views on topics ranging from the degree of First Amendment protection that corporations should receive to the nature of corporate behavior that shareholders and the broader public should come to expect."—Floyd Abrams, author of The Soul of the First Amendment
“In a lively and very readable book, Greenfield makes the case that corporations must have many, if not all, the  constitutional rights that people have.”— Paul Smith, Georgetown University Law Center
“Professor Kent Greenfield has written a brilliant book on the role of corporations in American democracy. Greenfield gets us past the discussion of whether corporations should be regarded as persons and focuses on how they should be treated under the law. The book is provocative, original, and engaging and sure to be essential reading in grappling with the role of corporations in our political system.”—Erwin Chemerinsky, Dean and Jesse H. Choper Distinguished Professor of Law, University of California, Berkeley School of Law