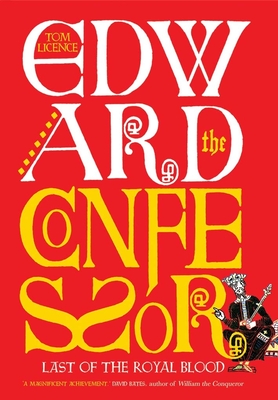 Last of the Royal Blood (The English Monarchs Series)

An authoritative life of Edward the Confessor, the monarch whose death sparked the invasion of 1066

"In putting flesh back on Edward’s bones Licence has brought a new succession story to popular attention."—Leanda de Lisle, The Times

“This fine biography of Edward the Confessor is both entertaining and elegiac.”—Nicholas Vincent, The Tablet

One of the last kings of Anglo-Saxon England, Edward the Confessor regained the throne for the House of Wessex and is the only English monarch to have been canonized. Often cast as a reluctant ruler, easily manipulated by his in-laws, he has been blamed for causing the invasion of 1066—the last successful conquest of England by a foreign power.

Tom Licence navigates the contemporary webs of political deceit to present a strikingly different Edward. He was a compassionate man and conscientious ruler, whose reign marked an interval of peace and prosperity between periods of strife. More than any monarch before, he exploited the mystique of royalty to capture the hearts of his subjects. This compelling biography provides a much-needed reassessment of Edward’s reign—calling into doubt the legitimacy of his successors and rewriting the ending of Anglo-Saxon England.


Praise For Edward the Confessor: Last of the Royal Blood (The English Monarchs Series)…

"In putting flesh back on Edward’s bones Licence has brought a new succession story to popular attention."—Leanda de Lisle, The Times

“Edward the Confessor is a triumph of scholarship that combines erudition with readability. … Tom Licence reveals Edward as an intelligent, conscientious and compassionate man who consistently favoured his great-nephew Edgar the aetheling as his successor but in the end was dramatically betrayed by his brother-in-law Harold.  This new analysis of a familiar story is told with clarity and verve: a magisterial achievement.”—Elisabeth van Houts, author of Married Life in the Middle Ages, 900-1300

“This may be one of the most important, certainly one of the most original books on eleventh-century England … The great virtue of this study is the author’s determination to tell the story of Edward’s life from a contemporary perspective, setting events in the context in which they unfolded, with full consideration of what moved the actors in their immediate present. The result throws a new light on Edward’s motives and actions, and promotes a complete re-thinking of the significance of his reign.”—Ann Williams, author of The English and the Norman Conquest

“A worthy successor to Frank Barlow’s Edward the Confessor, Tom Licence’s book authoritatively probes and reassesses supposedly well-known sources and presents us with a remarkable reappraisal of the king and an important historical period. Overall a magnificent achievement.”—David Bates, author of William the Conqueror

Tom Licence is Professor of Medieval History at the University of East Anglia.
Loading...
or support indie stores by buying on