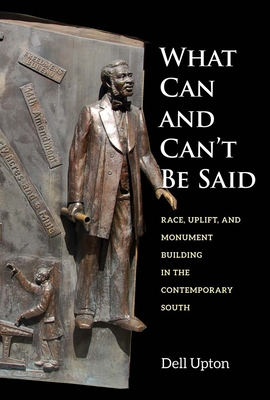 What Can and Can't Be Said

Race, Uplift, and Monument Building in the Contemporary South

“A noted authority on architectural history and American cities . . . engages with the ongoing debate over interpretations of race in public art.”—Glenn T. Eskew, American Historical Review

“Thorough, insightful, and of great use in comprehending the vital role that monumental art can and does play in American culture.”—Choice

An original study of monuments to the civil rights movement and Black history that have been erected in the American South over the past three decades, this powerful work explores how commemorative structures have been used to assert the presence of African Americans in contemporary Southern society while showing how the construction of such monuments frequently exposes the myth that racial differences have been overcome.

Examining monuments whose creation has been particularly contentious, from the Martin Luther King, Jr., National Memorial in Washington, D.C., to more obscure memorials such as the so-called "multicultural monument" in Bowling Green, Virginia, Dell Upton shows that monument builders must contend not only with varied interpretations of the African-American past but also with the continuing presence of White supremacy—not only in its traditional forms but also in the subtler, more recent assumptions that Whites are neutral arbiters of what is fair and accurate in such monuments.

Upton argues that Southerners, White and Black, share a convenient fiction—a “dual heritage” that allows them to acknowledge the Black past without relinquishing cherished White historical mythologies. In his conclusion, Upton considers how these two pasts might be reimagined and memorialized as a single Southern American history.


Praise For What Can and Can't Be Said: Race, Uplift, and Monument Building in the Contemporary South…

“A profoundly original book based on very deep scholarship. It advances a strong argument that is likely to generate serious debate.”—Kirk Savage, author of Monument Wars: Washington, D.C., the National Mall, and the Transformation of the Memorial Landscape
— Kirk Savage

“Engrossing, trenchant, and broad-minded, Dell Upton’s lucid analysis of both notorious and unfamiliar African-American history monuments underscores their centrality to the national conversation about race relations. Scholars, public officials, and general readers all have much to learn from it.”—Michele H. Bogart, author of The Politics of Urban Beauty: New York and Its Art Commission
— Michele H. Bogart

“At a time when public display of the Confederate flag has generated a lively debate over race relations, Dell Upton offers fresh insights into the motives behind the construction of Civil War and Civil Rights Era monuments in the South.”—Steven F. Lawson, author of Running for Freedom
— Steven F. Lawson

Dell Upton is professor of architectural history at the University of California, Los Angeles, and has studied the Southern landscape for four decades. His books include Another City: Urban Life and Urban Spaces in the New American Republic and Holy Things and Profane: Anglican Parish Churches in Colonial Virginia. He lives in Culver City, CA.
Loading...
or
Not Currently Available for Direct Purchase