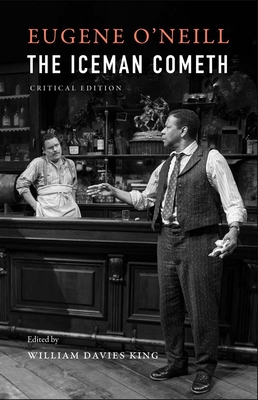 A critical edition of O’Neill’s most complex and difficult play, designed for student readers and performers

This critical edition of Eugene O’Neill’s most complex and difficult play helps students and performers meet the work’s demanding cultural literacy. William Davies King provides an invaluable guide to the text, including an essay on historical and critical perspectives; extensive notes on the language used in the play, and its many musical and literary allusions; as well as numerous insightful illustrations. He also gives biographical details about the actual people the characters are based on, along with the performance history of the play, to help students and theatrical artists engage with this labyrinthine work.


Praise For The Iceman Cometh…

“This new critical edition of The Iceman Cometh promises to be a much-consulted resource. King beautifully sums up the play’s relationship to the playwright’s life.”—Marc Robinson, Yale University

"The perfect follow-up to King’s Long Day’s Journey Into Night, this edition presents the standard text of Iceman alongside supplementary materials remarkable for their breadth, erudition, and accessibility."—Alexander Pettit, University of North Texas

"King’s stuff is the real McCoy and well worth the jack. His scrupulous commentary and notes, including his glossary of O’Neill’s slang, enrich our appreciation of an O’Neill masterpiece."—Zander Brietzke, author of The Aesthetics of Failure: Dynamic Structure in the Plays of Eugene O’Neill

"This superb critical edition of Iceman will undoubtedly become the definitive one. King weaves together his expansive knowledge of O’Neill with an arsenal of research and archival discoveries, to offer important contextualizations of one of O’Neill’s most important plays.  A must-have on the bookshelf and in the classroom."—Katie N. Johnson, Miami University

"In this extraordinary edition of The Iceman Cometh, Davies King’s deep and encyclopedic knowledge of the play and its context are evident everywhere, from the exceedingly informative notes, a pleasure to read in themselves, to the illuminating mini-essays on the characters, to the comprehensive essays on the critical and historical context, to the fascinating narrative about the play in production. This volume is a vital contribution to our understanding of O’Neill’s great play."—Brenda Murphy, Co-author of Eugene O’Neill Remembered

Eugene O’Neill (1888–1953) won the Pulitzer Prize for Drama four times and was awarded the Nobel Prize for Literature in 1936.
William Davies King is professor of theater at UC Santa Barbara and editor of the critical and multimedia editions of O’Neill’s Long Day’s Journey Into Night.
Loading...
or
Not Currently Available for Direct Purchase