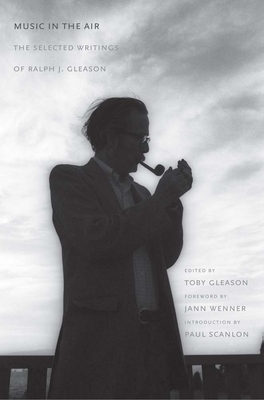 Music in the Air (Hardcover)

The co-founder of Rolling Stone magazine, Ralph J. Gleason was among the most respected journalists, interviewers, and critics writing about popular music in the latter half of the twentieth century. As a longtime contributor to the San Francisco Chronicle, Down Beat, and Ramparts, his expertise and insights about music, musicians, and cultural trends were unparalleled, whether his subject was jazz, folk, pop, or rock and roll. He was the only music journalist included on President Richard Nixon’s infamous “Enemies List,” which Gleason himself considered “the highest honor a man’s country can bestow upon him.”

This sterling anthology, edited by Gleason’s son Toby, himself a forty-year veteran of the music business, spans Ralph J. Gleason’s four decades as popular music’s preeminent commentator. Drawing from a rich variety of sources, including Gleason’s books, essays, interviews, and LP record album liner notes, it is essential reading for writers, historians, scholars, and music lovers of every stripe.

Two-time Grammy Award winner Ralph J. Gleason (1917–1975) was the author of numerous articles and three highly regarded books on music as well as an acclaimed TV and documentary film producer. Toby Gleason is a veteran jazz radio producer, programmer, and host, and a former assistant editor at Rolling Stone.
or
Not Currently Available for Direct Purchase
Copyright © 2020 American Booksellers Association