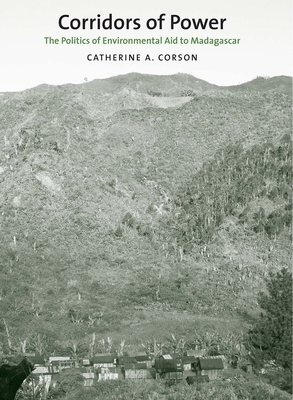 A highly regarded academic and former policy analyst and consultant charts the forty-year history of neoliberalism, environmental governance, and resource rights in Madagascar

Since the 1970s, the U.S. Agency for International Development has spent millions of dollars to preserve Madagascar’s rich biological diversity. Yet the island nation's habitats are still in decline. In this important ethnographic study, Catherine Corson illustrates how the effort to attract high-level political attention to conservation by isolating the environment in national parks and blaming impoverished Malagasy farmers has avoided challenging key drivers of Madagascar's deforestation.


Praise For Corridors of Power: The Politics of Environmental Aid to Madagascar (Yale Agrarian Studies Series)…

“An incisive and devastating account of the transnational politics of conservation. A must read!”—Michael Goldman, author of Imperial Nature: The World Bank and Struggles for Social Justice in the Age of Globalization
— Michael Goldman

“Catherine Corson masterfully shows how a conjuncture of devoted people carrying diverse interests and operating with institutional constraints came together to focus American development aid in Madagascar on biodiversity in parks.”—Christian Kull, author of Isle of Fire: The Political Ecology of Landscape Burning in Madagascar
— Christian Kull

“Corson’s remarkable multi-sited ethnography exposes the narratives and power relations of neo-liberal conservation in one of the world’s most hotly-contested landscapes. As environmental politics intensify in an era of climate change and financialisation, this is vital reading for all concerned with the intertwined futures of Africa’s forests and people.”—Melissa Leach, University of Sussex
— Melissa Leach

“Truly brilliant! Catherine Corson traces the environmental story in the one of the world’s most important biodiversity hotspots, showing how international and national power struggles undermined the well-meaning efforts of conservationists and donors, distorting sustainable development objectives in the country and ignoring the realities of peasant livelihoods. Personal insights from involvements in USAID, DFID, and numerous interactions in Madagascar and on Capitol Hill enliven this gripping account. It is a fascinating and well-documented read, brim-full of challenging perspectives for anyone engaged in trying to save the planet. It is indeed an important book.”—Sir Richard Jolly, Institute of Development Studies
— Sir Richard Jolly

“From the villages of rural Madagascar to the board rooms of conservation organisations in Washington DC, Corridors of Power traces the fascinating story of conservation in one of the world’s most biodiverse rich regions. Its rich ethnographic approach shows how knowledge and politics intertwine in the framing and practice of biodiversity conservation. This is a ‘must read’ book for anyone interested in conservation and development in Africa and beyond.”—Ian Scoones, author of Sustainable Livelihoods and Rural Development
— Ian Scoones

“This is a highly original book, which makes a major contribution to our understandings of theoretical debates around neoliberalism, policy formation, and the roles of international actors. It provides a fascinating and in-depth analysis, and as such this book deserves to be widely read.”—Rosaleen Duffy, SOAS University London
— Rosaleen Duffy

Catherine A. Corson is the Leslie and Sarah Miller Director of the Center for the Environment and Miller Worley Associate Professor of Environmental Studies at Mount Holyoke College and has worked in the White House, United States Agency for International Development, United States Congress, and World Bank. She lives in Amherst, MA.
or
Not Currently Available for Direct Purchase