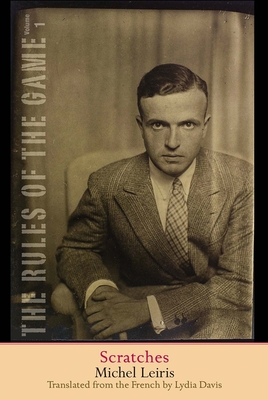 The Rules of the Game, Volume 1 (The Margellos World Republic of Letters #1)

A dazzling translation by Lydia Davis of the first volume of Michel Leiris’s masterwork, perhaps the most important French autobiographical enterprise of the twentieth century

Michel Leiris, a French intellectual whose literary works inspired high praise from the likes of Simone de Beauvoir and Claude Lévi-Strauss, began the first volume of his autobiographical project at the age of 40. It was the beginning of an endeavor that ultimately required 35 years and three additional volumes.

In Volume 1, Scratches, Leiris proposes to discover a savoir vivre, a mode of living that would have a place for both his poetics and his personal morality. “I can scarcely see the literary use of speech as anything but a means of sharpening one’s consciousness in order to be more—and in a better way—alive," he declares. He begins the project of uncovering memories, returning to moments and images of childhood—his father’s recording machine, the letters of the alphabet coming to life—and then of his later life—Paris under the Occupation, a journey to Africa, and a troubling fear of death.

Michel Leiris (1901–1990) was a profoundly influential and versatile French intellectual. His four-volume autobiographical essay, The Rules of the Game, serves as a primary document of artistic life in the twentieth century. Lydia Davis has received numerous awards as a translator of works from the French and as an author. She lives in upstate NY.

Praise For Scratches: The Rules of the Game, Volume 1 (The Margellos World Republic of Letters #1)…

“A multivolume memoir that is thoroughly Proustian . . . beautifully translated from the French by Lydia Davis . . . Like Proust, Leiris is for readers with patience and a love for language . . . Leiris’s subject is not simply himself, or his thoughts and feelings and actions, but writing itself.”—Jon M. Sweeney, America
“[A] magnificent English translation by Lydia Davis . . . Before Elena Ferrante, before Karl Ove Knausgaard, before the contemporary flourishing of autobiographical narrative, there was Michel Leiris’s memoir . . . Like watching an acrobat, the reader marvels at Leiris’s narrator moving, now slowly, now swiftly, through a series of sinuous loops, curls, and excursions.”—Tim Watson, Public Books
"Michel Leiris is the author of the most significant and arresting work of autobiography to have been written in the twentieth century."—John Sturrock
"For me his work is not only a document that enriches our knowledge of man, but also a personal testament that touches me deeply."—Francis Bacon