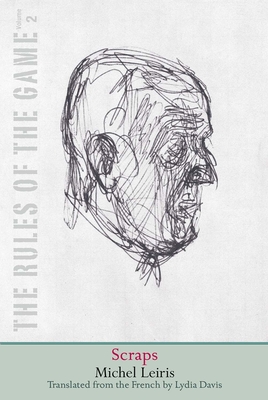 The Rules of the Game, Volume 2 (The Margellos World Republic of Letters #2)

One of the most versatile and beloved French intellectuals of the twentieth century, Michel Leiris reconceives the autobiography as a literary experiment that sheds light on the mechanisms of memory and on the way the unconnected events of a life become connected through invented narrative.

In this volume, the second in his four-volume epic autobiographical enterprise, Leiris merges quotidian events with profound philosophical self-exploration. He also wrangles with the disillusionment that accompanies his own self-reflection. In the midst of struggling with his own motives for writing an autobiographical essay, he comes to the revelation that life, after all, has aspects worth remembering even if moments of beauty are bookended by misery. Yet what can be said of human life, of his own life, when his memory is unreliable, his eyesight is failing, and his mood is despairing?

Praise For Scraps: The Rules of the Game, Volume 2 (The Margellos World Republic of Letters #2)…

“A multivolume memoir that is thoroughly Proustian . . . beautifully translated from the French by Lydia Davis . . . Like Proust, Leiris is for readers with patience and a love for language . . . Leiris’s subject is not simply himself, or his thoughts and feelings and actions, but writing itself.”—Jon M. Sweeney, America

“[A] magnificent English translation by Lydia Davis . . . Before Elena Ferrante, before Karl Ove Knausgaard, before the contemporary flourishing of autobiographical narrative, there was Michel Leiris’s memoir . . . Like watching an acrobat, the reader marvels at Leiris’s narrator moving, now slowly, now swiftly, through a series of sinuous loops, curls, and excursions.”—Tim Watson, Public Books

"I read with fervor the literary works of Michel Leiris and in particular the four volumes of Rules of the Game... He is incontestably one of the greatest writers of the century."—Claude Lévi-Strauss

"In Leiris's Rules of the Game Volume 2, I found again those qualities that had riveted me in Volume 1: those spirals of words coiling in on themselves and unrolling again into infinity, drilling into the abysses of the past and the heart,  yet glittering there in broad daylight, reflecting from image to image toward a secret that vanishes at the very instant it seems it must appear, the search having no other outcome than itself in the slow revolution of its thousand mirrors."—Simon de Beauvoir

Michel Leiris (1901–1990) was a profoundly influential and versatile French intellectual. His four-volume autobiographical essay, TheRules of the Game, serves as a primary document of artistic life in the twentieth century. Lydia Davis has received numerous awards as a translator of works from the French and as an author. She lives in upstate NY.
Loading...
or
Not Currently Available for Direct Purchase