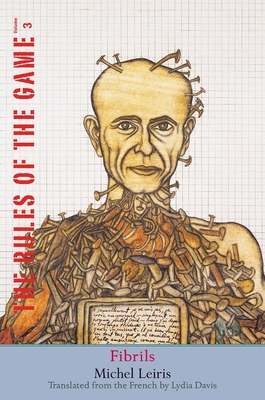 The Rules of the Game, Volume 3 (The Margellos World Republic of Letters #3)

A major publishing event: the third volume of Michel Leiris’s renowned autobiography, now available in English for the first time in a brilliant translation by Lydia Davis

A beloved and versatile author and ethnographer, French intellectual Michel Leiris is often ranked in the company of Proust, Gide, Sartre, and Camus, yet his work remains largely unfamiliar to English-language readers. This brilliant translation of Fibrils, the third volume of his monumental autobiographical project The Rules of the Game, invites us to discover why Lévi-Strauss proclaimed him “incontestably one of the greatest writers of the century.”

Leiris’s autobiographical essay, a thirty-five-year project, is a primary document of the examined life in the twentieth century. In Fibrils, Leiris reconciles literary commitment with social/political engagement. He recounts extensive travel and anthropological work, including a 1955 visit to Mao’s China. He also details his suicidal “descent into Hell,” when the guilt over an extramarital affair becomes unbearable. A ruthless self-examiner, Leiris seeks to invent a new way of remembering, probe the mechanisms of memory and explore the way a life can be told.

Michel Leiris (1901–1990) was a profoundly influential and versatile French intellectual and the author of Manhood and Phantom Africa. His four‑volume autobiographical essay, The Rules of the Game, serves as a primary document of artistic life in the twentieth century. Lydia Davis has received numerous awards as a translator of works from the French and as the author of the best-selling fiction collections Collected Stories and Can’t and Won’t.

Praise For Fibrils: The Rules of the Game, Volume 3 (The Margellos World Republic of Letters #3)…

“A multivolume memoir that is thoroughly Proustian . . . beautifully translated from the French by Lydia Davis . . . Like Proust, Leiris is for readers with patience and a love for language . . . Leiris’s subject is not simply himself, or his thoughts and feelings and actions, but writing itself.”—Jon M. Sweeney, America
“[A] magnificent English translation by Lydia Davis . . . Before Elena Ferrante, before Karl Ove Knausgaard, before the contemporary flourishing of autobiographical narrative, there was Michel Leiris’s memoir . . . Like watching an acrobat, the reader marvels at Leiris’s narrator moving, now slowly, now swiftly, through a series of sinuous loops, curls, and excursions.”—Tim Watson, Public Books
"There is no better translator than Lydia Davis, who has not only rendered in its necessarily complex light this infinitely important text of autobiographical-reflective thoughts and counterthoughts, but provided a sumptuous and clarifying introduction to its elegant author.—Mary Ann Caws, editor of the Yale Anthology of Twentieth-Century French Poetry
"Fibrilles, the French title of volume three of Leiris’s autobiographical masterwork, The Rules of the Game, has exactly the same connotations as its English cognate, Fibrils: small fibers or, in botany, the ultimate subdivisions of a plant root—which Leiris here punningly entwines with all the “febrile” filaments of terror or hallucination that striate the natural history of his mind.  Throughout her translation, Lydia Davis pays minute attention to the adventitious rhizomes of Leiris’s sentences, which move forward by ever moving laterally, disclosing the self by an endless process of subterranean deferral. Davis has now been transplanting Leiris into English for a quarter of a century: her craft as a translator shows in her own writing, as it does here on every page."—Richard Sieburth
After an official voyage in Communist China, Michel Leiris, an ethnographer and an autobiographer, started this third installment of his autobiographical endeavor with the intent of exploring the common roots of his life long passion for travel and his desire to be a poet. In the midst of the story of his journeys, the narration is interrupted by a failed suicide attempt which is followed by a week long coma and months of rehabilitation that provide him with another experience of voyage, this time in a kind of hoffmanesque nether world where the now dead theatrical and operatic figures that haunted his childhood come to revisit him. Never autobiography has been as close to music than in this opera buffa like complaint of a sixty years old insecure Cherubino who, in spite of having long crossed the gates of manhood, is still asking around: "Voi che sapete che cosa e l’amor."—Denis Hollier, New York University