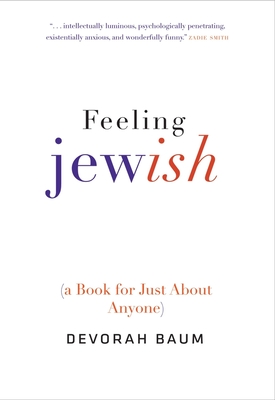 (A Book for Just About Anyone)

In this sparkling debut, a young critic offers an original, passionate, and erudite account of what it means to feel Jewish—even when you’re not.

Self-hatred. Guilt. Resentment. Paranoia. Hysteria. Overbearing Mother-Love. In this witty, insightful, and poignant book, Devorah Baum delves into fiction, film, memoir, and psychoanalysis to present a dazzlingly original exploration of a series of feelings famously associated with modern Jews. Reflecting on why Jews have so often been depicted, both by others and by themselves, as prone to “negative” feelings, she queries how negative these feelings really are. And as the pace of globalization leaves countless people feeling more marginalized, uprooted, and existentially threatened, she argues that such “Jewish” feelings are becoming increasingly common to us all.

Ranging from Franz Kafka to Philip Roth, Sarah Bernhardt to Woody Allen, Anne Frank to Nathan Englander, Feeling Jewish bridges the usual fault lines between left and right, insider and outsider, Jew and Gentile, and even Semite and anti-Semite, to offer an indispensable guide for our divisive times.

Devorah Baum is lecturer in English literature and critical theory, University of Southampton, and affiliate researcher with the Parkes Institute for the Study of Jewish/Non‑Jewish Relations. She is the codirector of the creative documentary feature film The New Man.

Praise For Feeling Jewish: (A Book for Just About Anyone)…

“A scintillating exploration of how feelings stereotypicaly associated with Jewishness are not quite so uncomplicatedly negative as is surmised and, what’s more, increasingly common in a globalised, hyper-connected society.”
—Keiron Pim, Spectator
"...an immensely informative, interesting and important book... we might well emulate Baum's bold and bracing book by interrogating our feelings, complex and contradictory though they may be, and try to understand what they tell us about ourselves and our world."—Glenn C. Altschuler, Jerusalem Post
"Rich and versatile. . . . An inexhaustible source of intellectual and visceral stimulation. . . . An expansive and rich contribution to ideas on Jewish perception of the self and of others in the modern and contemporary era."—Michiel van der Padt, Reading Religion
"Feeling Jewish is a subtle and canny postmodern spin on Jewish exceptionalism. . . . Every feeling Baum discusses is sent scurrying in all directions, careening into sibling or cousin feelings, split into antagonistic parts. She is alert to any irony or potential paradox in her neighborhood. . . . So we are taken on a giddy ride through many texts and topics. . . . The moves are both smooth and startling. . . . An exciting book."—Marty Roth, Jewish Currents
"Feeling Jewish provides an antidote to sentimentality through its weightiness, humor, and deeply felt literary and cultural critiques."—Leah Mirakhor, Yale Review
"Like the phenomenon it describes, this book is intellectually luminous, psychologically penetrating, existentially anxious, and wonderfully funny."—Zadie Smith
“Baum has startling clarity about complicated issues. The fluency of her amusement and engagement—her deadpan provocations, her intriguing formulations—gives Feeling Jewish an irresistible originality. After reading this book you will feel differently about your feelings and so about virtually everything else.”—Adam Phillips
“Feeling Jewish is a wonderful book for everyone who has feelings, whether or not they are Jewish. Devorah Baum gives us psychoanalysis (Jewish), literature (sometimes Jewish), and feelings (definitely Jewish) and makes them all come alive. She also gives us herself—a great new, neurotic friend.”—Stephen Frosh, Birkbeck College
“This marvellous book offers a rich, subtle, and thought-provoking analysis not only of ‘feeling Jewish’ but of a range of questions that go far beyond this. Challenging received ideas, Baum invites us to rethink assumptions and divisions we take for granted, from identity to gender, from love to hate, from doubt to certainty, and from insider to outsider.”—Darian Leader, psychoanalyst and author
“Baum guides us with great poise and comic verve through the strange and confusing labyrinth we call ‘feeling.’ As stimulating intellectually as it is involving emotionally, this sparklingly original book brilliantly attests to the intricate and mutually enriching relation of feeling to thinking.”—Josh Cohen, Goldsmiths, University of London