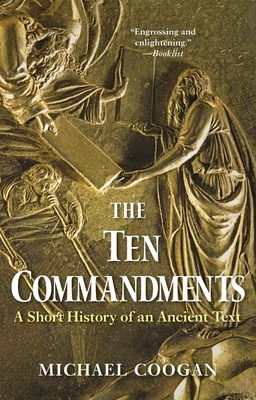 A Short History of an Ancient Text

Coogan discusses the meanings the Ten Commandments had for audiences in biblical times and observes that the form of the ten proscriptions and prohibitions was not fixed—as one would expect since they were purported to have come directly from God—nor were the Commandments always strictly observed. In later times as well, Jews and especially Christians ignored and even rejected some of the prohibitions, although the New Testament clearly acknowledges the special status of the Ten Commandments. Today it is plain that some of the values enshrined in the Decalogue are no longer defensible, such as the ownership of slaves and the labeling of women as men’s property. Yet in line with biblical precedents, the author concludes that while a literal observance of the Ten Commandments is misguided, some of their underlying ideals remain valid in a modern context.

Michael Coogan is director of publications for the Harvard Semitic Museum, lecturer on Old Testament/Hebrew Bible at Harvard Divinity School, editor of The New Oxford Annotated Bible, and author of God and Sex: What the Bible Really Says. He lives in Concord, MA.
Loading...
or
Not Currently Available for Direct Purchase