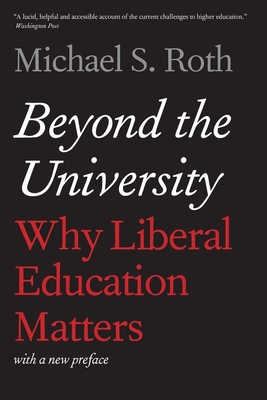 From the president of Wesleyan University, an eloquent defense of liberal education, seen against the backdrop of its contested history in America

Winner of the 2016 Frederic W. Ness Book Award sponsored by the Association of American Colleges and Universities

Contentious debates over the benefits—or drawbacks—of a liberal education are as old as America itself. From Benjamin Franklin to the Internet pundits, critics of higher education have attacked its irrelevance and elitism—often calling for more vocational instruction. Thomas Jefferson, by contrast, believed that nurturing a student’s capacity for lifelong learning was useful for science and commerce while also being essential for democracy. In this provocative contribution to the disputes, university president Michael S. Roth focuses on important moments and seminal thinkers in America’s long-running argument over vocational vs. liberal education.

Conflicting streams of thought flow through American intellectual history: W. E. B. DuBois’s humanistic principles of pedagogy for newly emancipated slaves developed in opposition to Booker T. Washington’s educational utilitarianism, for example. Jane Addams’s emphasis on the cultivation of empathy and John Dewey’s calls for education as civic engagement were rejected as impractical by those who aimed to train students for particular economic tasks. Roth explores these arguments (and more), considers the state of higher education today, and concludes with a stirring plea for the kind of education that has, since the founding of the nation, cultivated individual freedom, promulgated civic virtue, and instilled hope for the future.


Praise For Beyond the University: Why Liberal Education Matters…

"Illuminating. . . . Between pragmatism and idealism, the author strikes a moderate, balanced approach."—Kirkus Reviews

"An elegant and informative survey of the work of important thinkers."—Inside Higher Ed

"An accessible, useful, intelligent book on a topic that concerns many of us in higher education and about which there has been much discussion of late."—Jeffrey Von Arx, America

Winner of the 2016 Frederic W. Ness Book Award sponsored by the Association of American Colleges and Universities

"High school counselors ask students their career goals when they guide their college choices. In this deep and intriguing book, Michael S. Roth suggests they also ask what kind of people they want to be both at work and at home for the rest of their lives. Vocations are important, but so are values, enthusiasms and the ability to think critically about everything they encounter, not just problems at work. College leaders will read this book. High school students, parents and educators should too. Preserving the liberal arts is a fight that has to be fought in every generation."—Jay Mathews, education columnist for The Washington Post

"A seamless integration of some very old-fashioned and very progressive values. Graceful, light, and serious, colloquial yet simultaneously high-minded, Roth strikes exactly the right tone."—Anthony T. Kronman, author of Education's End: Why Our Colleges and Universities Have Given Up on the Meaning of Life

"Roth provides a powerful tool for advocacy of a liberal education for our times in the face of arguments that it is neither useful nor profitable."—Herbert Kohl, author and educator

"At a time when the public is preoccupied with preparing students for jobs and educators often counter with stale defenses of the liberal arts, Michael Roth offers an insightful view of undergraduate education that is grounded in the wisdom of past thinkers but well attuned to the needs of contemporary society."—Derek Bok, President Emeritus of Harvard University

Michael S. Roth is president of Wesleyan University. A professor in history and the humanities, he teaches at Wesleyan and reaches many thousands more through his open online Coursera course, The Modern and the Post-Modern.
Loading...
or
Not Currently Available for Direct Purchase