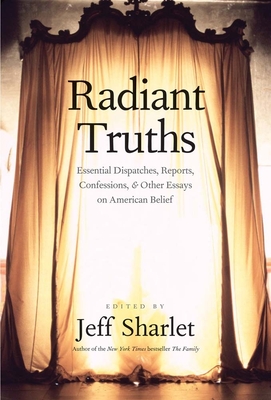 Essential Dispatches, Reports, Confessions, and Other Essays on American Belief

A startling and immensely pleasurable collection of American writings on belief, from the Civil War to Occupy Wall Street

Beginning with Walt Whitman singing hymns at a wounded soldier’s bedside during the Civil War, this surprising and vivid anthology ranges straight through to the twenty-first century to end with Francine Prose crying tears of complicated joy at the sight of Whitman’s words in Zuccotti Park during the brief days of the Occupy movement. The first anthology of its kind, Radiant Truths gathers an exquisite selection of writings by both well-known and forgotten American authors and thinkers, each engaged in the challenges of writing about religion, of documenting “things unseen.” Their contributions to the genre of literary journalism—the telling of factual stories using the techniques of fiction and poetry—make this volume one of the most exciting anthologies of creative nonfiction to have emerged in years.

Jeff Sharlet presents an evocative selection of writings that illuminate the evolution of the American genre of documentary prose. Each entry may be savored separately, but together the works enrich one another, engaging in an implicit and continuing conversation that reaches across time and generations.

“Rare is the collection of other people’s writing that coheres into something new and original; and rarer still is the one that takes on meaning because we read it through the eyes of the collector. Radiant Truths is exactly that rarity.”—Jonathan Kirsch, Los Angeles Review of Books
— Jonathan Kirsch

Jeff Sharlet is associate professor of English at Dartmouth College and New York Times bestselling author of The Family,C Street, and Sweet Heaven When I Die. He lives in Norwich, VT.
Loading...
or support indie stores by buying on