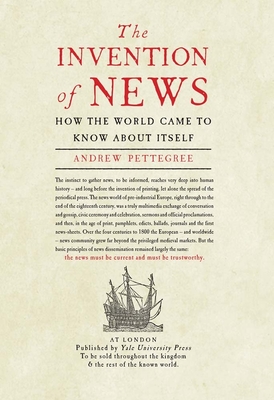 The Invention of News

How the World Came to Know About Itself

The extraordinary history of news and its dissemination, from medieval pilgrim tales to the birth of the newspaper

Long before the invention of printing, let alone the availability of a daily newspaper, people desired to be informed. In the pre-industrial era news was gathered and shared through conversation and gossip, civic ceremony, celebration, sermons, and proclamations. The age of print brought pamphlets, edicts, ballads, journals, and the first news-sheets, expanding the news community from local to worldwide. This groundbreaking book tracks the history of news in ten countries over the course of four centuries. It evaluates the unexpected variety of ways in which information was transmitted in the premodern world as well as the impact of expanding news media on contemporary events and the lives of an ever-more-informed public.

Andrew Pettegree investigates who controlled the news and who reported it; the use of news as a tool of political protest and religious reform; issues of privacy and titillation; the persistent need for news to be current and journalists trustworthy; and people’s changed sense of themselves as they experienced newly opened windows on the world. By the close of the eighteenth century, Pettegree concludes, transmission of news had become so efficient and widespread that European citizens—now aware of wars, revolutions, crime, disasters, scandals, and other events—were poised to emerge as actors in the great events unfolding around them.

Praise For The Invention of News: How the World Came to Know About Itself…

“A fascinating book—beautifully written, admirably organized, with a mass of information about even the most recondite means of collecting and transmitting news before 1800.”—Alastair Hamilton, TLS
— Alastair Hamilton

Andrew Pettegree is professor of modern history, University of St. Andrews, and founding director of the St. Andrews Reformation Studies Institute. He lives in Fife, Scotland.
Loading...
or
Not Currently Available for Direct Purchase