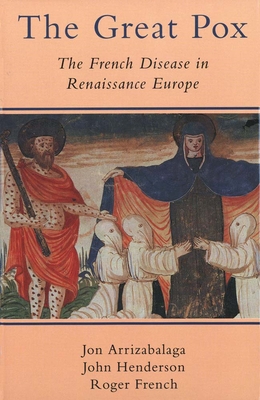 The French Disease in Renaissance Europe

One hundred and fifty years after the Black Death killed a third of the population of Western Europe, a new plague swept across the continent. The Great Pox—commonly known as the French disease—brought a different kind of horror: instead of killing its victims rapidly, it endured in their bodies for years, causing acute pain, disfigurement, and ultimately an agonizing death.

In this new study, three experts explore the impact of the new plague and society's reaction to its challenge. Using a range of contemporary sources, from the archives of charitable and sanitary institutions that coped with the sick to the medical tracts of those who sought to cure it, they provide the first detailed account of the experience of the disease across Renaissance Italy as well as in France and Germany.

The authors analyze the symptoms of the Great Pox and the identity of patients, richly documented in the records of the massive hospital for "incurables" established in early sixteenth-century Rome. They show how it challenged accepted medical theory and practice and provoked public disputations among university teachers. And at the most practical level, they reveal the plight of its victims at all levels of society, from ecclesiastical lords to the diseased poor who begged in the streets. Examining a range of contexts from princely courts and republics to university faculties, confraternities, and hospitals, the authors argue powerfully for a historical understanding of the Great Pox based on contemporary perceptions rather than a retrospective diagnosis of what later generations came to know as "syphilis."