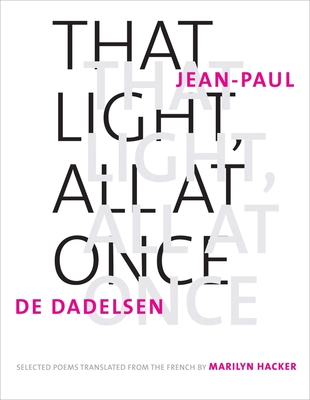 That Light, All at Once

Poetry in a time of upheaval

Equal parts dramatic and symphonic, the poetry of Jean-Paul de Dadelsen provides acute insight into the European consciousness of the first half of the twentieth century. With energetic innovation and imaginative depth, Dadelsen extols the somber beauty of his Alsatian homeland, grapples with the elusiveness of meaning, and decries religion’s futile attempts to speak to a continent ravaged by fascism and war. His is an acerbic and humane assessment of French and European identity that draws on the past and imagines the future, while remaining firmly rooted in the present.

In these poems, Dadelsen modulates himself in dramatic monologue, exploring a mosaic of voices to form a composite portrait of the postwar landscape. Inhabiting such characters as King Solomon, Johann Sebastian Bach, provincial French women, and a Hungarian resistant in the 1956 uprising, the poems in this new bilingual collection offer an inside look at the shifting cultural topography of midcentury Europe, forged in the war that reshaped our understanding of the human condition.

Praise For That Light, All at Once: Selected Poems (The Margellos World Republic of Letters)…

“Written in the aftershock of World War II, Jean-Paul de Dadelsen’s robust, irreverently reverent poems—deftly translated by Marilyn Hacker—speak from the fissured heart of Europe, and are nothing short of a revelation.”—Gabriel Levin, author of Errant

"Jean-Paul de Dadelsen's poignant poems tear me out of myself and reveal the presence of new things. His landscape of plains and rivers, swept by wind at the eastern edge of France, comes into focus, along with a powerful autobiographical realism and a God who remains silent. I so admire these strange, erudite, spiritually resonant poems."—Henri Cole

"With these flawless translations by poet Marilyn Hacker, we can finally take the full measure of Dadelsen’s achievement. His work is that of a witness who has seen the worst man has to offer, but responds, as if in defiance, with praise."—Ellen Hinsey, author of The Illegal Age


“In this masterful collection, Dadelsen’s unique sacred-profane music is rendered perfectly. That Light, All at Once is a gift to us.”—Yusef Komunyakaa, author of Everyday Mojo Songs of Earth

"Jean-Paul de Dadelsen’s poems spring out of a personal territory of intelligence, experience, and deep feeling, reminding us now of Brodsky, of Laforgue and Rilke, yet entirely individual. A major modern poet."—George Szirtes, winner of the 2004 T. S. Eliot Prize for Reel