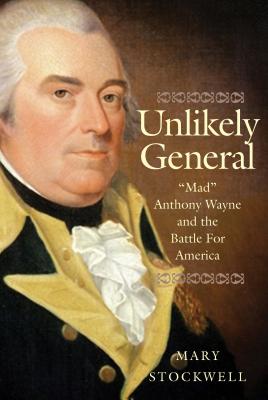 "Mad" Anthony Wayne and the Battle for America

Why did the once-ardent hero of the American Revolution become its most scandalous general?​

In the spring of 1792, President George Washington chose “Mad” Anthony Wayne to defend America from a potentially devastating threat. Native forces had decimated the standing army and Washington needed a champion to open the country stretching from the Ohio River westward to the headwaters of the Mississippi for settlement.

A spendthrift, womanizer, and heavy drinker who had just been ejected from Congress for voter fraud, Wayne was an unlikely savior. Yet this disreputable man raised a new army and, in 1794, scored a decisive victory at the Battle of Fallen Timbers, successfully preserving his country and President Washington’s legacy. Drawing from Wayne’s insightful and eloquently written letters, historian Mary Stockwell sheds light on this fascinating and underappreciated figure. Her compelling work pays long‑overdue tribute to a man—ravaged physically and emotionally by his years of military service—who fought to defend the nascent American experiment at a critical moment in history.

Praise For Unlikely General: "Mad" Anthony Wayne and the Battle for America…

“Stockwell represents Wayne as a quintessential American adventurer who struggled to be a leader, husband, and father in a rapidly changing world.”—Choice

“In Unlikely General, Mary Stockwell has made a strong case that room remains in the crowded genre of American Revolutionary-era biography for a fresh, well-written offering based on sound research. . . . An admirable accomplishment”—Gina M. Martino, Canadian Journal of History

“Well-written, with a keen eye for depicting the human side of history. Unlikely General draws the reader into exploring the passions, compulsions, and cultural perceptions of an important and justly-celebrated figure in the founding of the American republic.”—Richard Johnson, University of Washington

"Mary Stockwell has written what portends to be the definitive account of the life and times of Brigadier General "Mad Anthony" Wayne. One of George Washington's most able subordinates, Anthony Wayne's military performance during and after the Revolution is a story that needs to be more widely known. Wayne was indeed an "unlikely general" but one who played a central role in the early military affairs of the United States."— Charles P. Neimeyer, Marine Corps University

“Stockwell has given us an Anthony Wayne unlike any other—a brave and sometimes brilliant soldier, but also a complex, flawed, and emotionally vulnerable man. . . .an important and engaging biography.”—Mark Edward Lender, co-author of A Respectable Army: The Military Origins of the Republic, 1763-1789

Mary Stockwell is the former chair of the history department at Lourdes University in Ohio and the author of The Other Trail of Tears: The Removal of the Ohio Indians.
Loading...
or
Not Currently Available for Direct Purchase