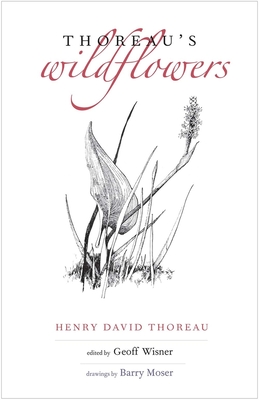 The first collection of Thoreau’s writings on the flowering plants of Concord, with more than 200 drawings by renowned artist Barry Moser

Some of Henry David Thoreau’s most beautiful nature writing was inspired by the flowering trees and plants of Concord. An inveterate year-round rambler and journal keeper, he faithfully recorded, dated, and described his sightings of the floating water lily, the elusive wild azalea, and the late autumn foliage of the scarlet oak.

This inviting selection of Thoreau’s best flower writings is arranged by day of the year and accompanied by Thoreau’s philosophical speculations and his observations of the weather and of other plants and animals. They illuminate the author’s spirituality, his belief in nature’s correspondence with the human soul, and his sense that anticipation—of spring, of flowers yet to bloom—renews our connection with the earth and with immortality.

Thoreau’s Wildflowers features more than 200 of the black-and-white drawings originally created by Barry Moser for his first illustrated book, Flowering Plants of Massachusetts. This volume also presents “Thoreau as Botanist,” an essay by Ray Angelo, the leading authority on the flowering plants of Concord.

“Thoreau’s Wildflowers collects some of Thoreau’s best botanical observations, pairing his prose with black and white drawings by illustrator Barry Moser. The text is drawn from Thoreau’s two-million-word journal, a work so massive that few have made their way through it. Most readers of Thoreau’s Wildflowers will be meeting these musings on plants for the first time.”—Danny Heitman, Wall Street Journal

“The botanical diary is richly illustrated with Barry Moser’s beautiful, very accurate black-and-white drawings. . . . This book will appeal to nature enthusiasts, fans of Thoreau, and those interested in botanical illustration.”—Choice

“One of the most remarkable animal-books of the season. . . . Geoff Wisner follows up his 2016 book Thoreau's Wildflowers with an even more enchanting volume from Yale University Press. . . . Readers of Thoreau's Animals [will be] drawn in by Thoreau's masterfully insightful observations and helped considerably by the lovely drawings throughout done by Debby Cotter Kaspari.”—Steve Donoghue, Christian Science Monitor

“Thoreau’s Animals, edited and introduced by Geoff Wisner, offers an engaging and often entertaining selection of Thoreau’s writings about the wild and domestic animal species he came upon in the forests, farms, and wetlands in and around Concord. It is a companion volume to Thoreau’s Wildflowers, and together the two volumes throw into relief the degree to which Thoreau was almost superhumanly awake to the flora and fauna of his surrounding environment. There is more here than testimony of Thoreau’s much-vaunted ‘powers of observation.’ The volumes offer clear evidence that in his later adult life Thoreau had thoroughly cleansed the doors of perception, and that the world appeared to him as infinite in its local manifestations.”—Robert Pogue Harrison, New York Review of Books

“Thoreau’s excursions through the woods of Concord were made with a ‘true sauntering of the eye.’ Geoff Wisner’s Thoreau’s Wildflowers is a sauntering through the landscape of Thoreau’s journals leading the reader to new discoveries of otherwise overlooked fruit.”—Jeffrey S. Cramer, editor of Walden: A Fully Annotated Edition

Geoff Wisner is an author, editor, book reviewer, and contributor to publications including the Christian Science Monitor and the Quarterly Conversation. He is author of A Basket of Leaves and editor of African Lives. He lives in New York City.

Barry Moser has illustrated or designed more than 300 books. His edition of Alice’sAdventures in Wonderland won the National Book Award in 1983. He lives in western Massachusetts.