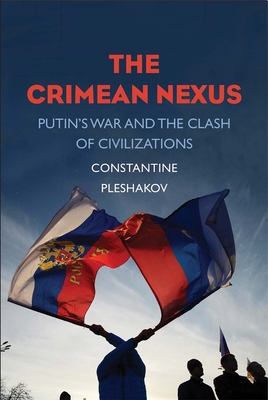 Putin’s War and the Clash of Civilizations

How the West sleepwalked into another Cold War

A native of Yalta, Constantine Pleshakov is intimately familiar with Crimea’s ethnic tensions and complex political history. Now, he offers a much-needed look at one of the most urgent flash points in current international relations: the first occupation and annexation of one European nation’s territory by another since World War II.

Pleshakov illustrates how the proxy war unfolding in Ukraine is a clash of incompatible world views. To the U.S. and Europe, Ukraine is a country struggling for self-determination in the face of Russia’s imperial nostalgia. To Russia, Ukraine is a “sister nation,” where NATO expansionism threatens its own borders. In Crimea itself, the native Tatars are Muslims who are vehemently opposed to Russian rule. Engagingly written and bracingly nonpartisan, Pleshakov’s book explains the missteps made on all sides to provide a clear, even-handed account of a major international crisis.

A former foreign policy analyst at the Institute of U.S. and Canada Studies in Moscow, Constantine Pleshakov emigrated to America in 1998. In 2012, The Princeton Review named him one of the 300 best college professors in the U.S. He lives in Amherst, MA.

Praise For The Crimean Nexus: Putin’s War and the Clash of Civilizations…

“A splendid book…beautifully written, thoroughly researched, and analytically piercing. Pleshakov has written a book that should be read by everyone who is paying attention to the chaos into which that region has descended.”—Martin J. Sherwin, George Mason University and Pulitzer Prize-winning author (with Kai Bird) of American Prometheus: The Triumph and Tragedy of J. Robert Oppenheimer
— Sherwin

“This is contemporary history as it ought to be told, with rich insight, wit, and stylish prose.” -- John Curtis Perry, Henry Willard Denison Professor of History
The Fletcher School of Law & Diplomacy, Tufts University
— Perry

"What is Crimea? How did this lovely peninsula become not only the apple of discord between Russia and Ukraine, but the potential spark for new European war? Like its subject, this gem of a book is a nexus—combining penetrating political history, colorful cultural reflections, shrewd geopolitical analysis, and slashing criticism of both Putin and Western leaders—all beautifully written by a Russian-émigré historian/novelist who is himself a third-generation Crimean."—William Taubman, author of the Pulitzer-Prize winning Khrushchev: The Man and His Era
— William Taubman

"Constantine Pleshakov’s The Crimean Nexus is a brilliant, insightful exposition of Crimean and Ukrainian history, relations with Russia, and the background of current international confrontation over Ukraine. It is essential reading for anyone who wishes to understand the current crisis in U.S.-Russian relations."—Jack  F. Matlock, Jr., former U.S. Ambassador to the USSR and author of Autopsy on an Empire, Reagan and Gorbachev: How the Cold War Ended, and Superpower Illusions
— Jack F. Matlock, Jr.

"This is a succinct and savvy account of the Crimean crisis, why it bodes badly for all concerned, and written in a style that reminds me of Joseph Brodsky."—Joseph J. Ellis, author of Founding Brothers:  The Revolutionary Generation
— Joseph J. Ellis

“As good a guide as we can hope for the tangle in which Crimea is enmeshed. He writes well, and presents his account as even-handed.”—Andrew Sheppard, East-West Nexus
— Andrew Sheppard
or
Not Currently Available for Direct Purchase
Copyright © 2020 American Booksellers Association