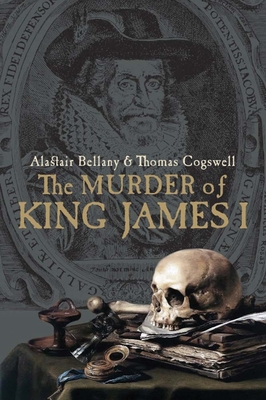 The Murder of King James I (Hardcover)

A year after the death of James I in 1625, a sensational pamphlet accused the Duke of Buckingham of murdering the king. It was an allegation that would haunt English politics for nearly forty years. In this exhaustively researched new book, two leading scholars of the era, Alastair Bellany and Thomas Cogswell, uncover the untold story of how a secret history of courtly poisoning shaped and reflected the political conflicts that would eventually plunge the British Isles into civil war and revolution. Illuminating many hitherto obscure aspects of early modern political culture, this eagerly anticipated work is both a fascinating story of political intrigue and a major exploration of the forces that destroyed the Stuart monarchy.

Praise For The Murder of King James I…

“Cogswell and Bellany are both accomplished story-tellers, and their collaboration is much more than the sum of their considerable parts… This is an astonishing detective work. It is also a magnificent piece of political reconstruction, locating each twist and turn in the plot within a fully international context… This book does more than anything published in the last 20 years to explain why Charles I never had a chance and why there was a civil war.”—John Morril, History Today
— John Morril

“[The authors] display sleuthing skills as exceptional as any fictional detective’s, having tracked down every reprint and manuscript copy of Eglisham’s original text… the richness of the material unearthed is compelling. By the end of this exhaustively researched and elegantly written study, Bellany and Cogswell have made the strongest case imaginable for their thesis”– Anne Somerset, Literary Review
— Anne Somerset

“The Murder of King James I is a work of imposing learning, imaginatively and adroitly organised, by two fine scholars who identify an unjustly neglected subject and bring it enjoyably to life.”—Blair Worden, London Review of Books
— Blair Worden

“Brilliant….an original and fascinating contribution to early modern studies... Told with skill by Bellany and Cogswell, it illuminates the perilous path of politics and paranoia that linked high statecraft and gutter gossip from the 1620s to the 1660s."—David Cressy, Journal of British Studies
— David Cressy

“The book is structured like a thriller, and even those familiar with the period will find themselves wanting to know what happens next… The clarity and wit of Bellany and Cogswell’s writing, and their inherently interesting subject,  mean that The Murder of King James I should appeal to, and deserves to find, a wide audience.”—Dr. David Coast, Reviews in History
— Dr. David Coast
or
Not Currently Available for Direct Purchase
Copyright © 2020 American Booksellers Association