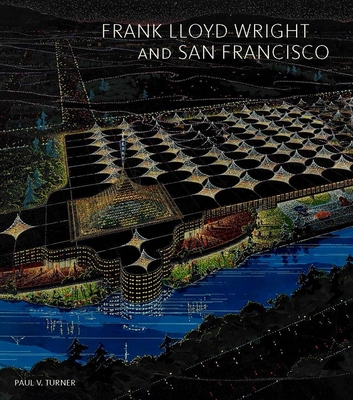 Frank Lloyd Wright (1867–1959) often spent time in San Francisco, which he called “the most charming city in America.” Paul V. Turner looks at the architect’s complex and evolving relationship with the city, surveying the full body of Wright’s work in the Bay Area—roughly thirty projects, a third of which were built. Spanning 1900 to 1959, they include houses, a gift shop, a civic center, a skyscraper, a church, an industrial building, a mortuary, and a bridge across the San Francisco Bay. The unbuilt structures are among Wright’s most innovative, and the diverse reasons for their failure counter long-held stereotypes about the architect.

Wright’s Bay Area projects are published together here for the first time, along with previously unpublished correspondence between Wright and his clients, as well as his Bay Area associate Aaron Green. Stories from San Francisco newspapers portray the media’s changing positions on Wright—from his early personal scandals to his later roles as eccentric provocateur and celebrated creative genius. Beautifully illustrated with the architect’s original drawings and plans, Frank Lloyd Wright and San Francisco highlights aspects of the architect’s career that have never before been explored, inspiring a new understanding of Wright, his personal and client interactions, and his work.

"[A]s Turner . . . shows in this astute architectural study (based on a class he taught for many years at Stanford University), the area is host to a fascinating cross-section of Wright’s work and was the focus of an especially intriguing set of unbuilt projects."—Publishers Weekly

"This book has everything: drawings and plans, archival and modern photographs, sensational quotes from Wright, accounts of his work in newspapers and the local architectural press, thoroughly documented notes, and comments on the contemporary state of the buildings. . . . A worthy addition to the Wright bibliography."—Library Journal

"[A]n unexpectedly fresh addition to the ever-longer shelf of books on the ever-provocative architect . . . Turner gives us a scholarly but flavorful history that’s far more satisfying than the lavish monographs or detailed studies that Wright tends to attract."—John King, San Francisco Chronicle

"[T]he Stanford University professor of art and architecture, who has lived in San Francisco for more than 40 years, makes a strong case—and an arresting story—out of Wright’s fondness for the City by the Bay."—Interior Design

"Frank Lloyd Wright and San Francisco is rich in insights into Wright’s character—his boundless energy through his eighties and into his early nineties, his public persona, his personal charm, his creative flexibility. The pleasure of this book is that Turner is able to tie Wright, who hated cities, to the one city that he genuinely liked and returned to over and over across five decades."—Jack Quinan, University at Buffalo, The State University of New York

"What a pleasure to read about Frank Lloyd Wright and his relationship with San Francisco! A great work in all the details, the words, and the images. Above all, the book brings Wright alive."—Bruce Brooks Pfeiffer

Paul V. Turner is Wattis Professor of Art, Emeritus, in the Department of Art and Art History at Stanford University.
Loading...
or
Not Currently Available for Direct Purchase