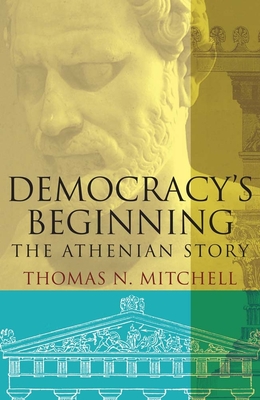 A history of the world’s first democracy from its beginnings in Athens circa fifth century B.C. to its downfall 200 years later

The first democracy, established in ancient Greece more than 2,500 years ago, has served as the foundation for every democratic system of government instituted down the centuries. In this lively history, author Thomas N. Mitchell tells the full and remarkable story of how a radical new political order was born out of the revolutionary movements that swept through the Greek world in the seventh and sixth centuries B.C., how it took firm hold and evolved over the next two hundred years, and how it was eventually undone by the invading Macedonian conquerors, a superior military power.

Mitchell’s superb history addresses the most crucial issues surrounding this first paradigm of democratic governance, including what initially inspired the political beliefs underpinning it, the ways the system succeeded and failed, how it enabled both an empire and a cultural revolution that transformed the world of arts and philosophy, and the nature of the Achilles heel that hastened the demise of Athenian democracy.

“Mitchell paints a picture of a society both alien and fascinating, underscoring the vibrancy of this long-lost civilisation with a collection of maps and photos in the centre of the book. His close scholarship shines in documenting the transition of Athens from financially and morally bankrupt oligarchy to emancipated democracy 2,500 years ago… with a commendable attention to detail that beautifully captures the essence of ancient Greek culture and politics.”—Roslyn Fuller, Irish Times
— Irish Times

“Thomas Mitchell has written an ambitious and substantial history of the Athenians and their polity… Complete with maps and well-chosen glossy illustrations, the book is lucidly written and elegantly produced.”—Edith  Hall, History Today
— Edith Hall

Thomas N. Mitchell is professor and former provost and president of Trinity College Dublin and chair of its School of Classics. He lives in Dublin.
Loading...
or
Not Currently Available for Direct Purchase