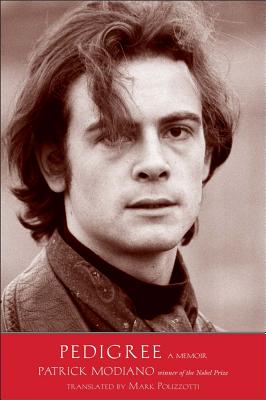 A Memoir (The Margellos World Republic of Letters)

Nobel laureate Patrick Modiano has said that his many fictions are all variations of the same story. Pedigree, his memoir, is the theme.

"Terse, yet somehow infinitely generous, Pedigree both enacts and accounts for Modiano’s fraught relationship with memory and the past—his own and those of his country."—Kaiama L. Gloverdec, New York Times Book Review

In this rare glimpse into the life of Nobel laureate Patrick Modiano, the author takes up his pen to tell his personal story. He addresses his early years—shadowy times in postwar Paris that haunt his memory and have inspired his world-cherished body of fiction. In the spare, absorbing, and sometimes dreamlike prose that translator Mark Polizzotti captures unerringly, Modiano offers a memoir of his first twenty-one years. Termed one of his “finest books” by the Guardian, Pedigree is both a personal exploration and a luminous portrait of a world gone by.

Pedigree sheds light on the childhood and adolescence that Modiano explores in Suspended Sentences,Dora Bruder, and other novels. In this work he re-creates the louche, unstable, colorful world of his parents under the German Occupation; his childhood in a household of circus performers and gangsters; and his formative friendship with the writer Raymond Queneau. While acknowledging that memory is never assured, Modiano recalls with painful clarity the most haunting moments of his early life, such as the death of his ten-year-old brother. Pedigree, Modiano’s only memoir, is a gift to his readers and a master key to the themes that have inspired his writing life.

Praise For Pedigree: A Memoir (The Margellos World Republic of Letters)…

"Compelling, . . . highly effective. . . . Mr. Modiano depends for effect not on rhetorical declaration or emotional outburst but on the accumulation of minor details. He is a writer unlike any other and a worthy recipient of the Nobel."—James Campbell, Wall Street Journal

"[Modiano’s] books . . . make up a system as beguiling and complete as any in contemporary literature. . . . In Pedigree, his memoir of his early life . . . he is preoccupied with the riddle of his father."—Alexandra Schwartz, New Yorker

"Terse, yet somehow infinitely generous, Pedigree both enacts and accounts for Modiano’s fraught relationship with memory and the past—his own and those of his country. It outlines the stakes of his literary practice and reveals the specific sufferings this practice entails."—Kaiama L. Gloverdec, New York Times Book Review

"In this slim but potent volume . . . [Modiano] grapples with the ghosts of the past and the events that shaped the man and writer he would become."—Publishers Weekly

"The only book that Modiano has explicitly identified as a memoir . . . [Pedigree] tells us that nearly all of the fictions would be true had the author not peopled them with his surrogates."—Joshua Cohen, Harper’s

"This book will stay with readers long after its end and begs for rereading. . . . Echoes of the gray, bleak, yet resilient mood of François Truffaut’s 1959 film The 400 Blows are felt throughout, perhaps because both works share post–World War II Paris as the setting. . . . A truly wonderful book."—Derek Sanderson, Library Journal (starred review)

"For those familiar with and interested in Modiano's fiction, Pedigree is essential reading."—M.A.Orthofer, Complete Review

"Fascinating . . . much of the book surprises us with irresistible images. . . . Pedigree is an excellent introduction to one of the more enigmatic Nobel laureates in recent years."—Michael Magras, Book Reporter

"[Pedigree] gathers emotional power as the book progresses in this crystalline translation by Mark Polizzotti. . . . The memoir is a map, and once you’ve read it, you are no longer a tourist walking in the strange land of Modiano’s fiction—now there are landmarks and familiar places you can revisit from a fresh angle."—Priyanka Kumar, Santa Fe New Mexican

"[Modiano], who won the Nobel Prize last year for a body of work as deft and beautiful as any in postwar European literature, is an excavator of memory . . . [Pedigree] tells the story of the author's early years."—David L. Ulin, Los Angeles Times

"For those coming anew to Modiano, reading Pedigree first might be a wise choice. His life, such as he tells it here, is as extraordinary and as bizarre as the situations of his fiction . . . [and] it also goes a long way to show what made him a writer."—J.P. Smith, The Millions

"Wonderfully served by an excellent translator, Mark Polizzotti . . . in [Pedigree] we find the key to unlock the haunting, charged, atmospheric novels that preceded it. . . . The memoir reiterates the elusive qualities of the novels and, in its concern for shadows and fog, casts the mysterious lives of [Modiano’s] parents as emblematic of a larger obscured history."—Jonathan Wilson, Los Angeles Review of Books

“The keys to unlocking Modiano are to be found between the covers of his memoir, Pedigree. . . . He builds his story, his case, forensically and deliberately, even dispassionately . . . giving Pedigree a haunting objectivity.”—Liam Hoare, Jewish Review of Books

Patrick Modiano, winner of the 2014 Nobel Prize for literature and an internationally beloved novelist, lives in Paris, France. Mark Polizzotti has translated more than forty books from the French and is director of the publications program at The Metropolitan Museum of Art, New York.
Loading...
or
Not Currently Available for Direct Purchase