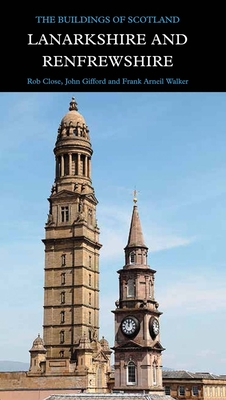 Lanarkshire and Renfrewshire are among the least-explored counties in Scotland, but no other area can lay claim to their astounding diversity of character, from the wild remote moorland of the south to the landscape of the Clyde estuary in the north-west, and from deeply rural villages to former steel and iron towns of the Lanarkshire coalfields. Renfrewshire boasts not only the medieval abbey at the centre of Paisley, but also the great port of Greenock, with one of the grandest municipal palaces of Victorian Scotland,and in the countryside Georgian houses and well-to-do Edwardian villas, including Charles Rennie Mackintosh’s Windyhill. In Lanarkshire are the great medieval castles of Bothwell and Craignethan, William Adam’s majestic hunting lodge at Chatelherault, and planned settlements of international significance, from the model weaving village of Robert Owen’s New Lanark to the post-war New Town of Cumbernauld.

“A must buy for anyone with an interest in Scotland’s built environment… In completing the series’ coverage of Scotland, this volume fills a very large and very important hole in the centre of the country.”—Undiscovered Scotland
— Undiscovered Scotland

Rob Close is an independent architectural historian. John Gifford was in charge of the Buildings of Scotland Research Unit between 1980 and 2011. Frank Arniel Walker is an architect and former Professor at the Univeristy of Strathclyde.
Loading...
or
Not Currently Available for Direct Purchase