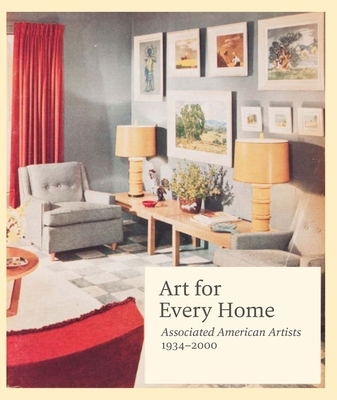 Art for Every Home (Hardcover)

An unparalleled study of a company that promoted and popularized American fine art prints, ceramics, and textiles throughout the 20th century >

The Associated American Artists was a commercial enterprise best known for publishing prints by Thomas Hart Benton, John Steuart Curry, and Grant Wood. Founded in 1934, AAA began as a crucial income opportunity for artists during the Great Depression and continued to operate for more than 60 years, showcasing work by nearly 600 artists from the United States and abroad in mail-order catalogues and galleries alike. Through successful marketing, associations with advertising agents, and commissions from major corporations, the organization sought to bring art—including ceramics and textiles in addition to prints—to every American home.

This book offers the first comprehensive and critical overview of AAA and its promotion of American art over half a century. Six principal essays explore the company’s history and the breadth of its endeavors in studio prints, glass, ceramics, and textiles, as well as the relationship between its home furnishings programs and American consumerism during the 1950s. Additional texts, including a case study of one artist’s relationship with AAA and an art dealer’s reminiscence of working there, add depth and color. Generously illustrated, this catalogue offers a highly original look at the organization that greatly expanded the audience for 20th-century American art.

Elizabeth G. Seaton is curator at the Marianna Kistler Beach Museum of Art, Kansas State University. Jane Myers is former senior curator of prints and drawings at the Amon Carter Museum of American Art. Gail Windisch is an independent researcher based in Los Angeles.
or
Not Currently Available for Direct Purchase
Copyright © 2020 American Booksellers Association