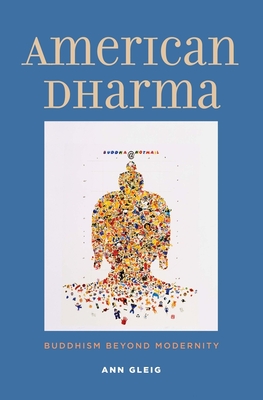 The past couple of decades have witnessed Buddhist communities both continuing the modernization of Buddhism and questioning some of its limitations. In this fascinating portrait of a rapidly changing religious landscape, Ann Gleig illuminates the aspirations and struggles of younger North American Buddhists during a period she identifies as a distinct stage in the assimilation of Buddhism to the West. She observes both the emergence of new innovative forms of deinstitutionalized Buddhism that blur the boundaries between the religious and secular, and a revalorization of traditional elements of Buddhism, such as ethics and community, that were discarded in the modernization process.

Based on extensive ethnographic and textual research, the book ranges from mindfulness debates in the Vipassana network to the sex scandals in American Zen, while exploring issues around racial diversity and social justice, the impact of new technologies, and generational differences between baby boomer, Gen X, and millennial teachers.

Ann Gleig is associate professor of religious studies at the University of Central Florida. She is co-editor of Homegrown Gurus: From Hinduism in America to American Hinduism and has published widely on contemporary Buddhism.

“Ann Gleig leaves no stone unturned in American Dharma . . . A comprehensive look at [a] new landscape . . . [An] engaging read.”—Tricycle
“Gleig shows us an American Buddhism filled with contradictions and a growing awareness of its own internal problems . . . Refreshingly even-handed . . . A monumental contribution.”—Justin Whitaker, Buddhadharma: The Practitioner's Quarterly
“Gleig . . . offers a balanced, theoretically sophisticated, insightful guide to the fast-changing landscape of American convert Buddhism.”—M. Heim, Choice
"Scholars of Buddhist-American studies will rejoice at the wealth of new materials presented in a coherent, readable set of studies. . . . American Dharma, with its strong theoretical foundation and primary materials based analysis, is sure to become a classic in the field"—Natalie Fisk Quli, Journal of Global Buddhism
“Ann Gleig’s American Dharma: Buddhism Beyond Modernity is a significant contribution to the critical literature on Buddhism in the United States. . . . Gleig’s excellent book will bring readers up to speed on fascinating developments in the important Zen and Vipassana sectors of the larger American Buddhist community, while setting a new standard for critical commentary about the ongoing evolution of modernism, traditionalism, and dharma in the United States.”—Richard Hughes Seager, Reading Religion
"In this engaging and thoughtful study, Ann Gleig asks challenging and important questions about the limits of modern Buddhism and the future of the tradition in the United States."—Scott A. Mitchell, author of Buddhism in America: Global Religion, Local Contexts
“Gleig's highly insightful examination of contemporary Euro-American Buddhism problematizes the prevailing framework of Buddhism modernism, revealing a postmodern complexity in which the familiar dichotomies of natal/convert, modern/traditional, secular/religious are no longer relevant.”—Richard K. Payne, Institute of Buddhist Studies
“This landmark work skillfully allows the very particular voices of contemporary American Buddhism to speak while highlighting the larger historical and theoretical contexts. This is an indispensable book for anyone hoping to understand the current contours of Buddhism in North America.”—David McMahan, Franklin & Marshall College
“In this thoughtful, nuanced book, Ann Gleig illuminates the profound shifts that have created America’s post-modern Buddhist scene.  This is essential reading for those seeking to understand the self-consciously intersectional, communal, and identarian developments in contemporary American Buddhism, as well as in the wider secularized spiritual culture in the United States.”—Erik Braun, University of Virginia
“This is an exciting and perceptive book. Ann Gleig convincingly shows how twenty-first century American Buddhism continues and contests foundational modernist attributes, producing post-modern developments in an ever richer and more complex Buddhist subculture.”—Jeff Wilson, author of Mindful America