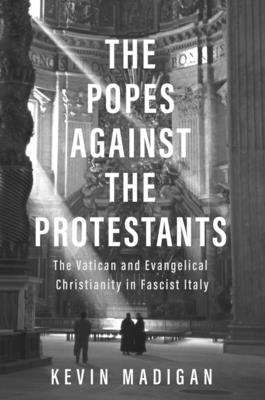 The Popes against the Protestants

The Vatican and Evangelical Christianity in Fascist Italy

Based on previously undisclosed archival materials, this book tells the fascinating, untold, and troubling story of an anti-Protestant campaign in Italy that lasted longer, consumed more clerical energy and cultural space, and generated far more literature than the war against Italy’s Jewish population.

Because clerical leaders in Rome were seeking to build a new Catholic world in the aftermath of the Great War, Protestants embodied a special menace, and were seen as carriers of dangers like heresy, secularism, modernity, and Americanism—as potent threats to the Catholic precepts that were the true foundations of Italian civilization, values, and culture. The pope and cardinals framed the threat of evangelical Christianity as a peril not only to the Catholic Church but to the fascist government as well, recruiting some very powerful fascist officials to their cause.

This important book is the first full account of this dangerous alliance.

Praise For The Popes against the Protestants: The Vatican and Evangelical Christianity in Fascist Italy…

"Many Americans will be surprised, as I was, that one of the Vatican’s main worries in the 1930s was a small but successful mission effort of evangelical Protestants in Italy. This would all be comical if were not being played out during the real tragedy of fascism. Madigan masterfully sees all sides of this little-known episode."—Garry Wills

“While shedding a penetrating light on Pius XI’s little known efforts to get Mussolini to act against the Protestants, Madigan also offers absorbing accounts of how this Church campaign played out in the hinterland. The Popes against the Protestants opens up a largely unexplored field for understanding the history of both the Roman Catholic Church and Italy.”—David Kertzer, author of the Pulitzer Prize-winning The Pope and Mussolini

"Kevin Madigan provides an essential reckoning with the deep currents of mistrust, and even hatred, that once openly set Catholics and Protestants against each other—currents that quietly run on even now, poisoning authentic belief and fueling fires of culture war. Madigan’s exemplary work of history has urgent relevance to today’s twin crises of faith and politics.”—James Carroll, author of The Truth at the Heart of the Lie

“In this groundbreaking study, Kevin Madigan traces the concerted Vatican antagonism, laced with antisemitic motifs, toward Protestant missionaries of various denominations. In the papal struggles against liberalism, Protestants, and the secular state, Madigan presents a new dimension of the popes’ support for fascism.”—Susannah Heschel, author of The Aryan Jesus: Christian Theologians and the Bible in Nazi Germany

“In this novel and acute study, Kevin Madigan shows the depth of papal hostility toward the Protestant sects that took root in Italy, and how the Vatican was as ready as Mussolini's dictatorship to persecute its perceived enemies.”—Richard Bosworth, author of Mussolini and the Eclipse of Italian Fascism

Kevin Madigan is Winn Professor of Ecclesiastical History at Harvard Divinity School. He lives in Cambridge, MA.
Loading...
or
Not Currently Available for Direct Purchase