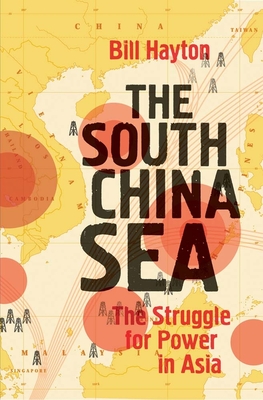 The Struggle for Power in Asia

"The greatest risk today in U.S.-Chinese relations is the South China Sea, through which passes 40% of world trade. . . . Hayton explains how this all came about and points to the growing risks of miscalculation and escalation."—Daniel Yergin, Wall Street Journal

China’s rise has upset the global balance of power, and the first place to feel the strain is Beijing’s back yard: the South China Sea. For decades tensions have smoldered in the region, but today the threat of a direct confrontation among superpowers grows ever more likely. This important book is the first to make clear sense of the South Sea disputes. Bill Hayton, a journalist with extensive experience in the region, examines the high stakes involved for rival nations that include Vietnam, India, Taiwan, the Philippines, and China, as well as the United States, Russia, and others. Hayton also lays out the daunting obstacles that stand in the way of peaceful resolution.

Through lively stories of individuals who have shaped current conflicts—businessmen, scientists, shippers, archaeologists, soldiers, diplomats, and more—Hayton makes understandable the complex history and contemporary reality of the South China Sea. He underscores its crucial importance as the passageway for half the world’s merchant shipping and one-third of its oil and gas. Whoever controls these waters controls the access between Europe, the Middle East, South Asia, and the Pacific. The author critiques various claims and positions (that China has historic claim to the Sea, for example), overturns conventional wisdoms (such as America’s overblown fears of China’s nationalism and military resurgence), and outlines what the future may hold for this clamorous region of international rivalry.

Praise For The South China Sea: The Struggle for Power in Asia…

"Bill Hayton’s splendid book lucidly covers these disputes in all their complexity from virtually every angle - historical, legal, political, economic and strategic. A journalist with the BBC and author of a previous book on Vietnam, he tells a good yarn, even when the topic is as dry as the United Nations Convention on the Law of the Sea (UNCLOS). Indeed, he may be the first person ever to have written an exciting account of a meeting of the Association of South-East Asian Nations (ASEAN)."—The Economist

"Mr. Hayton, a longtime BBC journalist, excels in distilling the complexity and absurdity of such South China Sea disputes—which include overlapping claims by Brunei, China, Indonesia, Malaysia, the Philippines, Taiwan and Vietnam—into a manageable narrative. His book offers the best combination of accessibility and accuracy so far published on the disputes. . . . This is a book for the layperson, not the lawyer."—Gregory B. Poling, Wall Street Journal

"The greatest risk today in U.S.-Chinese relations is the South China Sea, through which passes 40% of world trade. China’s assertion of ‘indisputable sovereignty’ over it riles other nations bordering those waters and is beginning to be challenged by the United States. In The South China Sea, Bill Hayton explains how this all came about and points to the growing risks of miscalculation and escalation."—Daniel Yergin, Wall Street Journal

"A fascinating account of this intensifying conflict. . . . [Hayton] has produced a detailed yet accessible story of how the South China Sea has emerged from a mythical danger zone to a real arena of conflict between regional powers and a source of big-power strife."—Global Asia

"The South China Sea is of mounting geopolitical importance yet remains obscure to most audiences outside Asia. Bill Hayton's book will do much to remedy that - helping governments to fashion wise policy, and ordinary people to understand the region. It is an invigorating read."—James Holmes, co-author of Red Star over the Pacific: China's Rise and the Challenge to U.S. Maritime Strategy

"Hayton does a fantastic job of covering all major dimensions of the dispute—historical, legal, resources, geostrategic, military—in a cogent, concise and compelling manner. As any good journalist would (and most academics don’t) he adds colour to the narrative by highlighting the role of key personalities, from Grotius to Bensurto and everyone in between. An excellent book."—Ian J. Storey, Editor-in-Chief, Contemporary South-East Asia

Bill Hayton is a longtime reporter with BBC News, specializing in contemporary Asia. He has also written for The Economist, the South China Morning Post, and the National Interest.
Loading...
or
Not Currently Available for Direct Purchase