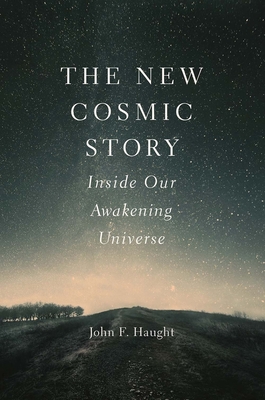 Inside Our Awakening Universe

A foremost thinker on science and religion argues that an adequate understanding of cosmic history requires attention to the emergence of interiority, including religious aspiration

Over the past two centuries scientific advances have made it clear that the universe is a story still unfolding. In this thought-provoking book, John F. Haught considers the deeper implications of this discovery. He contends that many others who have written books on life and the universe—including Stephen Hawking, Stephen Jay Gould, and Richard Dawkins—have overlooked a crucial aspect of cosmic history: the drama of life’s awakening to interiority and religious awareness. Science may illuminate the outside story of the universe, but a full telling of the cosmic story cannot ignore the inside development that interiority represents.

Haught addresses two primary questions: what does the arrival of religion tell us about the universe, and what does our understanding of the cosmos as an unfinished drama tell us about religion? The history of religion may be ambiguous and sometimes even barbarous, he asserts, but its role in the story of cosmic emergence and awakening must be taken into account.

Praise For The New Cosmic Story: Inside Our Awakening Universe…

“A well written book overall, and one that should prompt a more inspiring view of where we are in the Big Picture, The New Cosmic Story is highly recommended.”—John Farrell, Forbes.com

“This wonderful book richly rewards a slow, meditative reading. . . . It is a profound critique of scientific materialism and a vigorous and persuasive argument for taking science seriously in one’s religious outlook.”—Thomas E. Hosinski, CSC, Horizons

"A compelling argument for a broader understanding of religion in relation to our cosmic story."—Mary Evelyn Tucker, coauthor of Journey of the Universe

"Haught offers a coherent framework that gives value to the whole cosmic story revealed by science, while situating science and traditional religion together in a road map to a hopeful future in our still-unfinished cosmos."—Daryl P. Domning, professor of anatomy, Howard University


"A profound work that expands Haught's contributions to understanding religion in a universe that is still coming to be.”— Ilia Delio, Villanova University


"A significant antidote to the 'cosmic pessimism' so prevalent in academic circles! Haught champions a hopeful narrative of our unfinished universe that informs and enlivens all facets of belief and refreshes the conversation between science and faith."—Robert E. Ulanowicz, University of Maryland

John F. Haught is distinguished research professor, Georgetown University. He is author of twenty previous books, many of which deal with questions on the relationship between religion and natural sciences.
Loading...
or
Not Currently Available for Direct Purchase