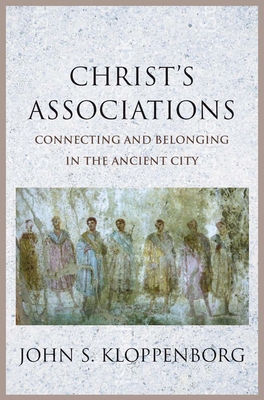 Connecting and Belonging in the Ancient City

A groundbreaking investigation of early Christ groups in the ancient Mediterranean

As an urban movement, the early groups of Christ followers came into contact with the many small groups in Greek and Roman antiquity. Organized around the workplace, a deity, a diasporic identity, or a neighborhood, these associations gathered in small face-to-face meetings and provided the principal context for cultic and social interactions for their members. Unlike most other groups, however, about which we have data on their rules of membership, financial management, and organizational hierarchy, we have very little information about early Christ groups.

Drawing on data about associative practices throughout the ancient world, this innovative study offers new insight into the structure and mission of the early Christ groups. John S. Kloppenborg situates the Christ associations within the broader historical context of the ancient Mediterranean and reveals that they were probably smaller than previously believed and did not have a uniform system of governance, and that the attraction of Christ groups was based more on practice than theological belief.

John S. Kloppenborg is university professor and chair of the Department for the Study of Religion at the University of Toronto. A specialist in Christian origins, he has written extensively on the Synoptic Sayings Gospel (Q) and the parables of Jesus.

Praise For Christ’s Associations: Connecting and Belonging in the Ancient City…

“This exceptionally important book offers a clearer understanding of who the early Christ followers really were, where they came from, and how their way of life eventually evolved into the preferred ‘religion’ of the Roman Empire.”—Anders Runesson, author of The Origins of the Synagogue

“John Kloppenborg employs his unmatched knowledge of Greek and Roman associations to construct the first systematic comparison of these small groups with early Christ assemblies. This is a masterpiece of historical research and a model of comparative method.”—Larry L. Welborn, author of The Young Against the Old
“Why did early Christian groups organize themselves the way they did? What might have attracted people to them? These are questions John Kloppenborg addresses with exemplary clarity and force of argument.”—Arjan Zuiderhoek, author of The Ancient City
“This data-rich book is a must-read for those interested in the world of earliest Christianity, providing new understandings of social history and of philology. The reader will learn about the rich, the powerful, the citizen and about the immigrant, the artisan, the laborer, the enslaved, and the poor.”—Laura Nasrallah, author of Archaeology and the Letters of Paul
“An impressive achievement and a leap forward for scholarship of early Christianity. Kloppenborg paints a vivid picture of life in Greco-Roman associations and shows that early Christ assemblies can only be understood when seen in that light.”—Koenraad Verboven, author of The Economy of Friends