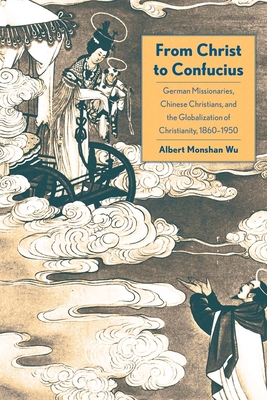 From Christ to Confucius (Hardcover)

German Missionaries, Chinese Christians, and the Globalization of Christianity, 1860-1950

A bold and original study of German missionaries in China, who catalyzed a revolution in thinking among European Christians about the nature of Christianity itself

In this accessibly written and empirically based study, Albert Wu documents how German missionaries—chastened by their failure to convert Chinese people to Christianity—reconsidered their attitudes toward Chinese culture and Confucianism. In time, their increased openness catalyzed a revolution in thinking among European Christians about the nature of Christianity itself. At a moment when Europe’s Christian population is falling behind those of South America and Africa, Wu’s provocative analysis sheds light on the roots of Christianity’s global shift.

Albert Monshan Wu is assistant professor of history at the American University of Paris. He writes regularly for the Los Angeles Review of Books and Commonweal.

Praise For From Christ to Confucius: German Missionaries, Chinese Christians, and the Globalization of Christianity, 1860-1950…

“Albert Wu provides a cogent account of German missions in China from 1860 to 1950. Though most missionaries considered their mission in China a failure, Wu has found bright spots in an otherwise bleak outcome.”—Daniel H. Bays, author of A New History of Christianity in China
— Daniel H. Bays

"Albert Wu's engaging, well-researched book explores the growing sympathy of German missionaries in China towards indigenous religion and culture. His elegantly argued account looks at national rivalries among missionaries, shifts within Chinese society, and the overarching importance of World War One. This is an impressively wide-ranging and thoughtful book."—David Blackbourn, Vanderbilt University
— David Blackbourn

“From Christ to Confucius offers an intriguing and revisionist account of German Christian missionary activity in China. Breaking out of the conventional debate about cultural imperialism, Albert Wu presents a sophisticated study of the ambiguities and the counter-intuitive effects of the German missionary presence in China.”— Sebastian Conrad, author of What Is Global History?
— Sebastian Conrad

“In this engaging and learned history of Christianity in modern Germany and China, Albert Wu has given us a splendid transnational account that will be of interest to students and scholars of imperialism and anti-imperialism, Christianity, nationalism, and cosmopolitanism.”— Andrew Zimmerman, George Washington University
— Andrew Zimmerman