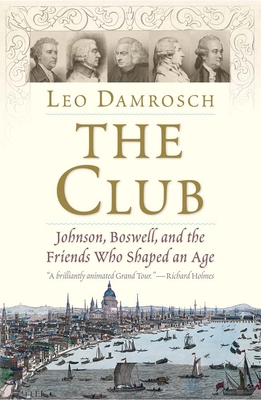 
Praise For The Club: Johnson, Boswell, and the Friends Who Shaped an Age…

“Leo Damrosch is a masterly narrator steeped in the minutiae of the lives he assembles. The result is an engaging and readable tour.”—Philip Carter, Journal of Modern History

Leo Damrosch is the Ernest Bernbaum Professor of Literature Emeritus at Harvard University. His previous works include the National Book Critics Circle Award winner Jonathan Swift: His Life and His World, and Eternity’s Sunrise: The Imaginative World of William Blake. He lives in Newton, MA.

1. Members of the Club differed in many of their opinions (toward politics, travel, foreigners, the poor, women, etc.), and yet they enjoyed lively discussions and for the most part remained friends. What can we learn from them about maintaining civility?

2. What aspects of eighteenth century life appeal to you? Which customs, attitudes, or laws would seem intolerable?

3. Regardless of talent or education, women were specifically excluded from membership in the Club. Even so, Johnson valued women and had close relationships with several. Can you identify any advantages that women of the times enjoyed? How did they exert influence?

4. What sense do you get of different styles of marriage: loving (Garrick, Boswell), unhappy (Johnson), and polite but unromantic (the Thrales)? How did Boswell rationalize his compulsive recourse to prostitutes?

5. Reynolds promoted the idea of the Club with the intent of relieving Johnson’s bouts with depression through lively discussion, food, and drink that fueled weekly Friday night gatherings. Does your reading club or other group resemble the Turk’s Head Tavern gatherings in any way?

6. Despite the difficulties of travel in his day, Johnson adored speed and adventure. What aspects of his trip with Boswell to the Hebrides would appeal to you? Does the illustration depicting Johnson a treacherous seaside path that he clambered down (p. 258) change your opinion of his vitality?

7. Both Johnson and Boswell suffered difficult childhoods and illnesses while receiving minimal sympathy from their parents. Compare their experiences with those of children today.

8. Do you find the evidence convincing to suggest that Johnson would be diagnosed today with obsessive compulsive disorder, and Boswell with bipolar disorder and alcoholism?

9. If Boswell were contemplating a biography of a public figure or celebrity in the twenty-first century, who would you propose as an interesting subject?

10. Surprisingly, Boswell included Johnson’s eloquent argument against slavery in The Life of Samuel Johnson, then proceeded to defend the institution using terms like “humane” and “mercy.” Does this change your opinion of Boswell? What opinions or positions of our times would you regard as rationalizations?