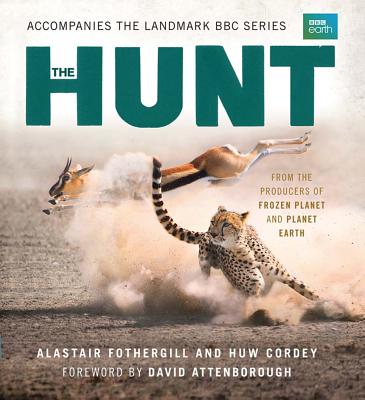 The Outcome Is Never Certain

An unprecedented, close-up view of predators and their prey in life-or-death conflict, from the grasslands of East Africa to the icy Arctic

Nothing in nature is more dramatic than the exertion of a hunter in pursuit and the maneuvers of its intended prey. This breathtaking volume, spectacularly illustrated with over 250 of the most gripping and colorful nature images ever taken, reveals the dynamic relationship between predator and prey. Alastair Fothergill, Huw Cordey, and their unmatched photography team have explored the world filming killer whales, harpy eagles, Darwin’s bark spiders in Madagascar, Arctic wolves, polar bears, octopuses, and dozens of other species—all engaged in potentially lethal contests between hungry pursuer and desperate quarry.

The Hunt, developed and written during the filming of the television series—which the Wall Street Journal called "[E]xtraordinary"—dispels the myth of predator as ruthless killer. The wealth of new information uncovered during the creation of the project shows that predators are the hardest-working animals in nature, failing more often than succeeding in their attempts to capture dinner. This book focuses on the amazing diversity of predator strategies and the equally various escape techniques of their prey, highlighting the life-and-death moments when the skills of hunter and hunted are stretched to the extreme and the outcome is never certain.

Praise For The Hunt: The Outcome Is Never Certain…

“This work is a marriage of brilliant photography and informative prose about all aspects of the fascinating relationship between predators and their prey.”—John M. Marzluff, author of Welcome to Subirdia and co-author of In the Company of Crows and Ravens
— John M. Marzluff

Alastair Fothergill is an award-winning producer of nature documentaries and co-owner of Silverback Films, the production company that created the BBC1 series The Hunt and Disneynature’s films Bears and Monkey Kingdom. He is a former head of the BBC Natural History Unit and is the author of three books, including Planet Earth: As You’ve Never Seen It Before. He lives in Bristol, UK.

Huw Cordey was the series producer of The Hunt. He has been making wildlife documentaries for twenty years, producing landmark series such as Land of the Tiger, Sir David Attenborough’s Life of Mammals, Planet Earth, Big Cat Diary, South Pacific, and Discovery Channel’s six-part natural history series North America. He is a contributing author of Planet Earth: As You’ve Never Seen It Before. He lives in Bristol, UK.