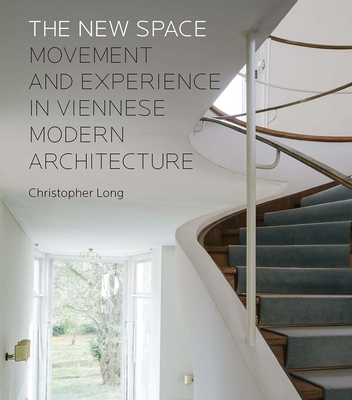 Scholars have long stressed the problem of ornament and expression when considering Viennese modernism. By the first decade of the 20th century, however, the avant-garde had shifted its focus from the surface to the interior. Adolf Loos (1870–1933), together with Josef Frank (1885–1967) and Oskar Strnad (1879–1935), led this generation of architects to interpret modernism through culture and lifestyle. They were interested in the experience of architectural space: how it could be navigated, inhabited, and designed to reflect the modern way of life while also offering respite from it.

The New Space traces the theoretical conversation about space carried out in the writings and built works of Loos, Frank, and Strnad over four decades. The three ultimately explored what Le Corbusier would later—independently—term the architectural promenade. Lavishly illustrated with new photography and architectural plans, this important book enhances our understanding of the development of modernism and of architectural theory and practice.

Christopher Long is professor and chair of history/theory in the School of Architecture at the University of Texas at Austin.

Praise For The New Space: Movement and Experience in Viennese Modern Architecture…

“The argument for a building as visage versus a site for complex, lived-in experiences is long-standing in architectural debates. Fixating on a fraught moment in this discourse within Viennese architecture, Christopher Long puts into relief the work and writings of Adolf Loos, Josef Frank, and Oskar Strnad—all concerned with the relationship between the architectural and the subjective interior.” —Metropolis
“Christopher Longpresents a new chapter in the history of the concept of space in architectural theory and practice, and he persuasively argues its importance.”—David Leatherbarrow, University of Pennsylvania School of Design
"Christopher Long is well known for his efforts to address the nuances of modern architecture in the work of early 20th-century Viennese architects, particularly Josef Frank and Adolf Loos. The New Space draws upon that earlier work and adds to it in significant ways."—Caroline Constant, University of Michigan