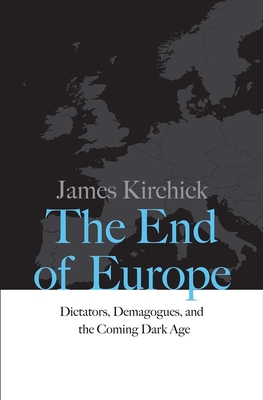 The End of Europe

Once the world’s bastion of liberal, democratic values, Europe is now having to confront demons it thought it had laid to rest. The old pathologies of anti-Semitism, populist nationalism, and territorial aggression are threatening to tear the European postwar consensus apart. In riveting dispatches from this unfolding tragedy, James Kirchick shows us the shallow disingenuousness of the leaders who pushed for “Brexit;” examines how a vast migrant wave is exacerbating tensions between Europeans and their Muslim minorities; explores the rising anti-Semitism that causes Jewish schools and synagogues in France and Germany to resemble armed bunkers; and describes how Russian imperial ambitions are destabilizing nations from Estonia to Ukraine. With President Trump now threatening to abandon America's traditional role as upholder of the liberal world order and guarantor of the continent's security, Europe may be alone in dealing with these unprecedented challenges.

Based on extensive firsthand reporting, this book is a provocative, disturbing look at a continent in unexpected crisis.


Praise For The End of Europe: Dictators, Demagogues, and the Coming Dark Age…

"The book plainly states its mission: to deliver 20th century European history to its readers lest they be forced to repeat it . . . an urgent SOS from across the ocean about how worthy institutions can unravel with alarming speed."—Max Holleran, Slate

"A tour d’horizon of a continent drifting away from its intellectual and cultural moorings . . . these are unpleasant truths that high-minded Europeans cannot admit to one another."—James Traub, Wall Street Journal

"An urgent survey of the many threats facing European societies. . . It would be hard to find a better assessment of the multi-frontal assault on what had been, however briefly, a continental consensus about liberal values, trans-state integration and the essential connections between Europe and North America."—Charles King, TLS

"A young American’s brilliant analysis of the dire state of world politics. . . . Trump and Brexit figure large and Kirchick shares my exasperation that we are turning away from liberal values and the benefits of the EU."—Alastair Campbell, Observer

“Well-informed . . . and dismayingly infectious. Kirchick gives the reader a dismal guided tour of a continent in which extremism is gaining the upper hand.”—David Frum, Atlantic

"Students of geopolitics and current affairs would do well to spend time with this book, which, though deceptively slender, contains multitudes."—Kirkus Reviews

"The book makes it clear that America’s political crisis is part of a larger crisis of democratic liberalism and institutional legitimacy that stretches from Seattle to Athens, and Kirchick does his American readers an invaluable service by informing them, in a can’t-put-it-down style, that they aren’t going through this alone."—Michael J. Totten, Tower

"Shoehorning a comprehensive topic like modern Europe into a single volume is always difficult and The End of Europe does what it does very well. . . . By the time readers finish [the book] . . . Kirchick’s suggestion that the situation ‘evokes the perilous 1930s’ doesn’t carry one whiff of hyperbole."—Mark Hemingway, Federalist

"Precise and powerful . . . The End of Europe is a serious and important piece of journalism, cool-headed and even-handed, though never in doubt of which side it is on. . . . James Kirchick has written a warning letter that may have arrived too late."—Stephen Daisley, Commentary

"An engaging meld of journalism and history. . . . The End of Europe offers a readable but historically grounded view of a deeply troubled continent."—Fred Seigel, City Journal

"Young, but already extraordinarily well-seasoned as a reporter on the European beat. . . . Kirchick’s keen and highly readable reporting fills in a lot of the missing pieces in this new global jigsaw puzzle, such that the big picture comes more clearly into focus. . . . The End of Europe is essential reading for everyone trying to make sense of the current kaleidoscope of world relations wherein historical revisionism, disinformation and cyber warfare mirror constantly shifting 'alternative truths' remanufactured via denial, denunciation, deception and deflection."—Marilyn Gates, New York Journal of Books

"A journalistic tour de force. . . . The End of Europe goes beyond well-covered stories in the American press to uncover more subtle threats to Europe. . . . Kirchick’s prescriptions show depth and boldness on these polarizing matters."—David Jimenez, Nations&States.com

“Deeply researched . . . . Kirchick’s pessimistic view is now taken far more seriously than it would have been a few years ago.”—Robert Fulford, National Post

"Kirchick's book does not attend much to Christianity and decent nationalism as therapies for Europe's distress . . . Europe rechristened and repatriated would have more children, and live with greater hope, because it had more to defent/ But Kirchick's book is intended to be more diagnostic than prescriptive."—Cole Aronson, First Things

“Remarkably ambitious, provocative and vividly written. . . . It should be must reading for all those interested in European politics. . . . [a] fascinating account.”—Karl Pfeifer, HurryUpHarry.org

"Those of us who lived on the wrong side of the Berlin Wall celebrated the beginning of a new era of peace and democracy when the Iron Curtain fell. Now that era may already be over, and James Kirchick vividly explains why we are now facing the end of Europe instead of the end of history."—Garry Kasparov, chairman of the Human Rights Foundation and author of Winter Is Coming: Why Vladimir Putin and the Enemies of the Free World Must Be Stopped

"James Kirchick is a gloomily brilliant observer of European affairs—panoramic in his survey, precise in his details and anecdotes, severe and persuasive in his judgments, always lucid, always alert."—Paul Berman, author of The Flight of the Intellectuals and Power and the Idealists

"Like all dystopias, The End of Europe is pedagogy with a fierce moral message. James Kirchick has drawn a masterly portrait of a continent in its deepest crisis since World War II. The book is compulsory reading for anybody who cares about Europe."—Josef Joffe, Stanford University and author of The Myth of American Decline

"James Kirchick has given us a powerful, penetrating, and elegant analysis of the present state of Europe. This book is not a celebration but a lament and a warning—and also a call to action to Americans and Europeans alike."—Robert Kagan, author of The World America Made

"From brilliant American scholar James Kirchick, we have received a resounding wake-up call for Princess Europa. Reading The End of Europe from Paris is chilling, perceptive and essential to make sense of the current geopolitical state of affairs."—Bernard-Henri Lévy

James Kirchick is a visiting fellow at the Brookings Institution, a columnist for Tablet magazine, and a correspondent for the Daily Beast. His articles and essays appear frequently in the Los Angeles Times, the Washington Post, POLITICO, the London Spectator and the Frankfurter Allgemeine Zeitung.