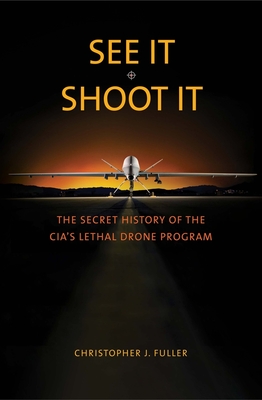 The Secret History of the CIA’s Lethal Drone Program

This eye-opening study uncovers the history of the most important instrument of U.S. counterterrorism today: the armed drone. It reveals that, contrary to popular belief, the CIA’s covert drone program is not a product of 9/11. Rather, it is the result of U.S. counterterrorism practices extending back to an influential group of policy makers in the Reagan administration.

Tracing the evolution of counterterrorism policy and drone technology from the fallout of Iran-Contra and the CIA’s “Eagle Program” prototype in the mid-1980s to the emergence of al-Qaeda, Fuller shows how George W. Bush and Obama built upon or discarded strategies from the Reagan and Clinton eras as they responded to changes in the partisan environment, the perceived level of threat, and technological advances. Examining a range of counterterrorism strategies, he reveals why the CIA’s drones became the United States’ preferred tool for pursuing the decades-old goal of preemptively targeting anti-American terrorists around the world.

Christopher J. Fuller is lecturer in modern American history in the History Department at the University of Southampton. He holds joint U.K. and U.S. citizenship, and has researched and taught U.S. foreign policy since 2000.

Praise For See It/Shoot It: The Secret History of the CIA’s Lethal Drone Program…

“An insightful history of the development of America’s counterterrorism strategy, technology and organization from Reagan to Obama. This book offers well-researched and balanced judgments which underscore the crucial need for robust and clear oversight of covert operations.”—Bruce Riedel, Director of the Intelligence Project, Brookings Institution
— Bruce Riedel

“In Christopher J. Fuller’s brilliantly written book, the origins of America’s controversial policy of using drones to fight terrorism emerge clearly for the first time.”—Rhodri Jeffreys-Jones, author of We Know All About You: The Story of Surveillance in Britain and America
— Rhodri Jeffreys-Jones

“Scholars, practitioners, and citizens alike will learn more here than anywhere else about the rise of drones and, especially, the largely unheralded role the CIA played in this development."—Loch K. Johnson, Regents Professor of Public and International Affairs, University of Georgia
— Loch K. Johnson

“A deeply researched, provocative, and important analysis of the origins of the CIA’s drone program.”—Kathryn Olmsted, Professor of History, University of California, Davis
— Kathryn Olmsted