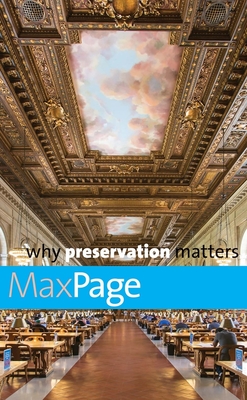 Commemorating the fiftieth anniversary of the National Historic Preservation Act, a critique of the preservation movement—and a bold vision for its future

Every day, millions of people enter old buildings, pass monuments, and gaze at landscapes unaware that these acts are possible only thanks to the preservation movement. As we approach the October 2016 anniversary of the United States National Historic Preservation Act, historian Max Page offers a thoughtful assessment of the movement’s past and charts a path toward a more progressive future.

Page argues that if preservation is to play a central role in building more-just communities, it must transform itself to stand against gentrification, work more closely with the environmental sustainability movement, and challenge societies to confront their pasts. Touching on the history of the preservation movement in the United States and ranging the world, Page searches for inspiration on how to rejuvenate historic preservation for the next fifty years. This illuminating work will be widely read by urban planners, historians, and anyone with a stake in the past.

Praise For Why Preservation Matters (Why X Matters Series)…

“Page . . . throws down the gauntlet in Why Preservation Matters, calling out members of a movement he finds elitist, in thrall to neoliberalism, and disconnected from its rightful aim of social justice.”—Architect Magazine

“The basic points we know: Old buildings can enrich neighborhoods and become regional attractions. They also make smart environmental sense more often than not. But on the 50th anniversary of the National Historic Preservation Act, the author argues these points with detailed passion — and also stresses that the cultures embodied in a building, even the scars of history, can be more important than architectural details.”—John King, San Francisco Chronicle

"Since coalescing into a national movement a half century ago, historic preservation has been notoriously un-self-critical. Max Page helps to rectify this problem in this thoughtful, provocative assessment of what has been accomplished and where preservationists need to direct their energies in the future. At this critical juncture the movement needs a catalytic call to action comparable to those written by Rachel Carson and Jane Jacobs. This could be that book."--Richard Longstreth, George Washington University

“Historic preservation has reached a moment of profound and provocative creative ferment and this book is a testament to that innovative thinking and the desire to contest long-standing norms. Max Page’s eloquent and incisive volume is a worthy map to guide the future of preservation.” – Stephanie K. Meeks, President and CEO of the National Trust for Historic Preservation


"Max Page succinctly and elegantly demonstrates how preservation transcends antiquarian aesthetics to embrace the most pressing questions of the day, from economic democracy to sustainability to reconciliation following state terrorism."--Lawrence Vale, Massachusetts Institute of Technology

Max Page is a professor of architecture and history at the University of Massachusetts Amherst and the author of The City’s End: Two Centuries of Fantasies, Fears, and Premonitions of New York’s Destruction. He was awarded a Guggenheim Fellowship and is the winner of the Spiro Kostof Award from the Society of Architectural Historians and the Rome Prize.
Loading...
or
Not Currently Available for Direct Purchase