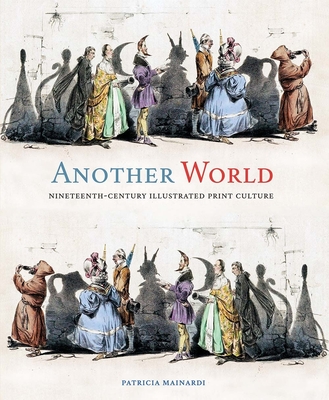 The remarkable story of the stylistic, cultural, and technical innovations that drove the surge of comics, caricature, and other print media in 19th-century Europe

Taking its title from the 1844 visionary graphic novel by J. J. Grandville, this groundbreaking book explores the invention of print media—including comics, caricature, the illustrated press, illustrated books, and popular prints—tracing their development as well as the aesthetic, political, technological, and cultural issues that shaped them. The explosion of imagery from the late 18th century to the beginning of the 20th exceeded the print production from all previous centuries combined, spurred the growth of the international art market, and encouraged the cross-fertilization of media, subjects, and styles. Patricia Mainardi examines scores of imaginative and innovative prints, focusing on highly experimental moments of discovery, when artists and publishers tested the limits of each new medium, creating visual languages that extend to the comics and graphic novels of today. Another World unearths a wealth of visual material, revealing a history of how our image-saturated world came into being, and situating the study of print culture firmly within the context of art history.

Patricia Mainardi is professor emerita of art history at the Graduate Center of the City University of New York and Chevalier in France’s Order of Academic Palms. She has received the College Art Association’s Charles Rufus Morey Award and numerous fellowships, including from the National Endowment for the Humanities and the Institute for Advanced Study.

“A rich work . . . [that] traces the history of popular illustration in the nineteenth-century.”—Deirdre D. Spencer, ARLIS/NA Reviews
“A fine contribution . . . A deeply researched and thoughtful book.”—P. A. Stirton, Choice
“One of the most important contributions of Another World is its successful edging of photography aside. Mainardi’s study of mass cultural visual forms in the nineteenth century is in fact among the ﬁrst to dethrone the photograph from its usual position of dominance in histories of visual culture in the modern transatlantic world, and that is an achievement of wide-ranging importance.”—S. Hollis Clayson, Journal of Modern History
“Another World  provides a new, insightful analysis of the developments of graphic expression and visual culture in the nineteenth century and uncovers a trove of visual and textual materials that is rarely, if ever, addressed in depth. The book thus makes a vital contribution to the study of nineteenth-century print culture.”—Ruth E. Iskin, Ben-Gurion University of the Negev