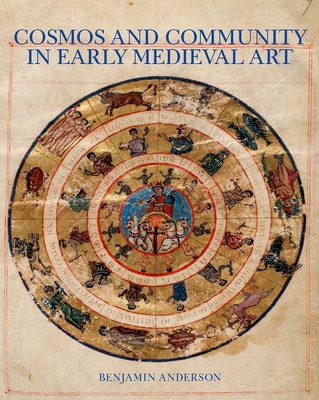 In the rapidly changing world of the early Middle Ages, depictions of the cosmos represented a consistent point of reference across the three dominant states—the Frankish, Byzantine, and Islamic Empires. As these empires diverged from their Greco-Roman roots between 700 and 1000 A.D. and established distinctive medieval artistic traditions, cosmic imagery created a web of visual continuity, though local meanings of these images varied greatly. Benjamin Anderson uses thrones, tables, mantles, frescoes, and manuscripts to show how cosmological motifs informed relationships between individuals, especially the ruling elite, and communities, demonstrating how domestic and global politics informed the production and reception of these depictions. The first book to consider such imagery across the dramatically diverse cultures of Western Europe, Byzantium, and the Islamic Middle East, Cosmos and Community in Early Medieval Art illuminates the distinctions between the cosmological art of these three cultural spheres, and reasserts the centrality of astronomical imagery to the study of art history.

Praise For Cosmos and Community in Early Medieval Art…

“Anderson should be commended for his ambitious and refreshing approach.… Well organized and clear in its thesis, Anderson’s book is a strong contribution.”—Dorothy Hoogland Verkerk, caa.reviews

"Cosmos and Community is a welcome and thought-provoking study, a significant addition to the vast literature on the subject."—Steven H. Wander, Bryn Mawr Classical Review

“Cosmos and Community is a thoughtful and thought-provoking study…. Anderson’s willingness to cross so many evidential and academic boundaries is refreshing as well as enlightening.”—Dennis Trout, Classical Journal


“There is no doubt about [the book’s] originality, and the interest of the argument is nicely balanced by the attractiveness of the images.”—Charles Burnett, West 86th: A Journal of Decorative Arts, Design History, and Material Culture

Winner of the the 2020 Karen Gould Prize in Art History, sponsored by the Medieval Academy of America

“Anderson has a serious achievement here: tightly focused and deeply learned, Cosmos and Community in Early Medieval Art will set a new course, providing new pivots for our arguments.”—Glenn Peers, The University of Texas at Austin

“Benjamin Anderson provides a richly textured sense of the degree to which aspects of princely exclusivity and scholarly community associated with this art depended on each other. No existing study attempts to explain the differences between the cosmological art of these three cultural spheres in such a thoughtful way.”—Persis Berlekamp, The University of Chicago

Benjamin Anderson is associate professor in the Department of History of Art and Visual Studies at Cornell University.
Loading...
or
Not Currently Available for Direct Purchase