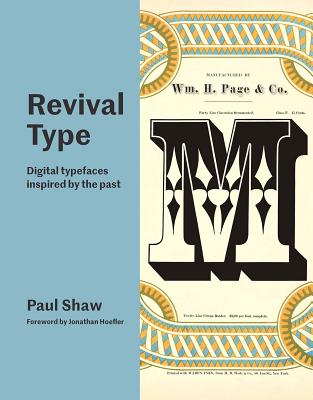 Digital Typefaces Inspired by the Past

An illuminating account of the design inspirations and technical transformations that have shaped the digital typefaces of the 21st century
In this fascinating tour through typographic history, Paul Shaw provides a visually rich exploration of digital type revival. Many typefaces from the pre-digital past have been reinvented for use on computers and mobile devices, while other new font designs are revivals of letterforms, drawn from inscriptions, calligraphic manuals, posters, and book jackets. Revival Type deftly introduces these fonts, many of which are widely used, and engagingly tells their stories.
Examples include translations of letterforms not previously used as type, direct revivals of metal and wood typefaces, and looser interpretations of older fonts. Among these are variations on classic designs by John Baskerville, Giambattista Bodoni, William Caslon, Firmin Didot, Claude Garamont, Robert Granjon, and Nicolas Jenson, as well as typefaces inspired by less familiar designers, including Richard Austin, Philippe Grandjean, and Eudald Pradell. Updates and revisions of 20th-century classics such as Palatino, Meridien, DIN, Metro, and Neue Haas Grotesk (Helvetica) are also discussed. Handsomely illustrated with annotated examples, archival material depicting classic designs, and full character sets of modern typefaces, Revival Type is an essential introduction for designers and design enthusiasts into the process of reinterpreting historical type.

Paul Shaw is an award-winning designer, typographer, and design historian based in New York City. He teaches at Parsons School of Design and the School of Visual Arts, and is the designer or co-designer of eighteen typefaces.
Loading...
or support indie stores by buying on
(This book is on backorder)