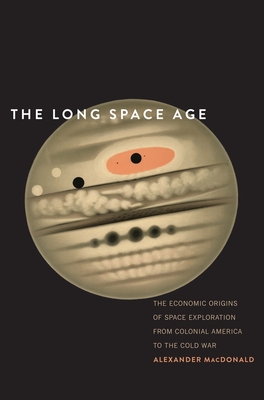 An economic historian argues that privately funded space exploration is not a new development, but a trend beginning with the astronomical observatories of the nineteenth century

Over the last half-century there has been a rapid expansion in commerce off the surface of our planet. Nations and corporations have placed hundreds of satellites that provide billions of dollars’ worth of communications, scientific, global positioning, and commercial services, while construction has been completed on humanity’s ninth and largest space station. On the planet itself, government agencies, corporations, and individuals plan for the expansion of economic development to the lunar surface, asteroids, and Mars. The future of space exploration seems likely to include a mix of large government funded missions as well as independent private-sector missions.

The Long Space Age examines the economic history of American space exploration and spaceflight, from early astronomical observatories to the International Space Station, and argues that the contemporary rise of private-sector efforts is the re-emergence of a long-run trend not a new phenomenon.


Praise For The Long Space Age: The Economic Origins of Space Exploration from Colonial America to the Cold War…

“Today’s race among private funders may not be as different from the 19th-century pursuit as people might think . . . Highly recommended.”—Choice

“[MacDonald] convincingly shows that early astronomical observation was not a separate phenomenon from the later Space Age, but a necessary precursor that should be seen as contiguous with it.”—Eh.net

"This is a critical new piece in the existing literature of the history of spaceflight, particularly for those scholars that are trying to understand how the current state of human spaceflight has emerged or even how space exploration has been empirically communicated to the public."—Shalina Chatlani, Quest: The History of Spaceflight Quarterly

“MacDonald makes a fascinating argument juxtaposing the relationship of post-Sputnik space activities with related efforts between the early-nineteenth century and the present. It is a remarkably new and different argument.”—Roger D. Launius, Smithsonian National Air and Space Museum

“A groundbreaking book that turns the conventional telling of space history on its head.  MacDonald convincingly shows that entrepreneurs and benefactors appeared first, alongside government support, not last.”—Howard McCurdy, author of Space and the American Imagination

"MacDonald has written a provocative new history of the “Long Space Age” that invites us to rethink both the motivations for space exploration and its shifting sources of its support. Based on considerable original economic analysis, he elegantly shows that the so-called new era of private spaceflight has a precedent dating back over a century.”—Asif Siddiqi, Fordham University

Alexander MacDonald advises on national space strategy development and private sector space activities and is an expert on the economic history of space exploration. He received his doctorate in economic and social history from the University of Oxford. He is an economist with the Jet Propulsion Laboratory (JPL), which is managed for NASA by the California Institute of Technology, and is currently assigned to serve as Senior Economic Advisor with NASA. He was awarded the AIAA History Manuscript Award in 2016.
Loading...
or
Not Currently Available for Direct Purchase