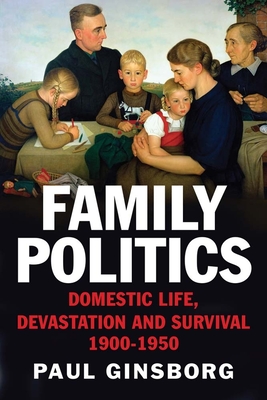 An exploration of the convulsive history of the 20th century’s first five decades, seen through the lens of families and family life

In this masterly twentieth-century history, Paul Ginsborg places the family at center stage, a novel perspective from which to examine key moments of revolution and dictatorship. His groundbreaking book spans 1900 to 1950 and encompasses five nation states in the throes of dramatic transition: Russia in revolutionary passage from Empire to Soviet Union; Turkey in transition from Ottoman Empire to modern Republic; Italy, from liberalism to fascism; Spain during the Second Republic and Civil War; and Germany from the failure of the Weimar Republic to the National Socialist state.

Ginsborg explores the effects of political upheaval and radical social policies on family life and, in turn, the impact of families on revolutionary change itself. Families, he shows, do not simply experience the effects of political power, but are themselves actors in the historical process. The author brings human and personal elements to the fore with biographical details and individual family histories, along with a fascinating selection of family photographs and portraits.

From WWI—an indelible backdrop and imprinting force on the first half of the twentieth century—to post-war dictatorial power and family engineering initiatives, to the conclusion of WWII, this book shines new light on the profound relations among revolution, dictatorship, and family.